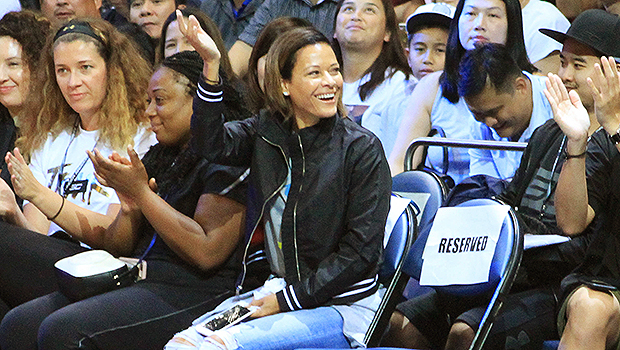 It’s no secret that Golden State Warrior Steph Curry, 34, is at the top of his game. But behind every athlete is a mother, and Steph’s mother Sonya Curry, 55, is known for her unfailing support of her famous son. Born Sonya Alice Adams, the mother of three is also a Montessori school administrator, a former athlete herself, and is the former wife of Steph’s father, Dell Curry. Here’s everything you should know about the remarkable Sonya Curry.

Her Life Growing Up

Sonya’s current success in life didn’t come without challenges. The beautiful mom of NBA stars, sons Stephen and Seth Curry was born in Radford, Virginia to Cleive and Candy Adams, and her upbringing is described as one of extreme poverty. They lived in a trailer home and according to The Undefeated, Sonya and her family also encountered extreme racism and confrontations with the Ku Klux Klan in the heavily segregated area. Her mother Candy has said that as a child in the ’50s and ’60s, she was forced to walk 5 miles to get to the nearest school for black children in Christiansburg. Candy also was not able to ride public buses, and her family could only shop at black-owned stores because of severe racism elsewhere.

Still, Sonya rose above her deep-seated circumstances to excel in volleyball, track, and basketball during high school and later play volleyball for Virginia Tech, where she met future husband Dell Curry. As she was the first person in her family to go to college, Sonya’s accomplishments there were profound. She graduated with a degree in education.

Her background is something she took care to instill in her children. “I wanted them to understand that in their world that could be seen as sheltered they needed to hear stories,” she told The Undefeated in 2019. “The biggest thing she told us is that we grew up a little different than she did,” Steph said. “She was always quick to remind us up on the realities around the country and to appreciate our experience.”

Kodak Black’s Kids: Everything To Know About His 2 Children & The One On The Way

The Curry family began when Dell and Sonya met at Virginia Tech, where the future lovebirds spotted each other during a basketball practice. They married in 1988, the same year they welcomed Steph as their first child. They later had son Seth in 1990 and their only daughter Sydel in 1994. The family had to move often due to Dell’s career as an NBA player from 1986 to 2002 — he’s famous for his time with the Charlotte Hornets.

Their three children are enormously successful as athletes, as Steph plays with the Golden State Warriors, Seth with Philadelphia 76ers, and daughter Sydel Curry played volleyball at Elon University. Sonya and Dell also have five grandchildren.

Steph Curry’s parents shockingly ended their union after 33 years of marriage in 2021, as Sonya filed for divorce July 14, in North Carolina.  The former couple made the public announcement in August of that year. Steph told The Ringer in February 2022 about how he dealt with the high-profile divorce of his parents, despite now having his own wife, Ayesha Curry, and his own children.

“I had to make sure I was in that moment with both of them separately and this wasn’t just this whole kind of thing,” he said of breaking Ray Allen’s 3-point record and separately embracing his parents in December 2021. “That is how I choose to approach that. Because it is challenging.”

Sonya now has three granddaughters and two grandsons, and she remains committed to them, as well as to her three children. “We stay committed to and supportive of our children and grandchildren and will remain on connected paths,” the former couple said in a statement about their split to People in August 2021. “As this comes with a great deal of sadness, our focus and desire is for our family’s continued happiness.”

While the highly public divorce wasn’t easy, Sonya is moving forward. She published her book Fierce Love: A Memoir of Family, Faith & Purpose in 2022 and continues to stand steadily behind her children. Sonya is also looking for the positive that came out of her 33 year marriage.

“I was just happy and fulfilled to know that the parenting and all the love and the nurturing that we’ve poured into our children is coming out that way and he’s able to express that,” she said of how Steph has handled his parents’ divorce in the public eye. Sonya made the comments while appearing on The Tamron Hall Show on May  4. “It just made me so proud because now it’s like they’re giving to me everything I poured into them. It’s coming back to me full-fold and it’s such a blessing.”

Dimitri Snowden Begs Judge for a Divorce: Free Me From Christeline Petersen!