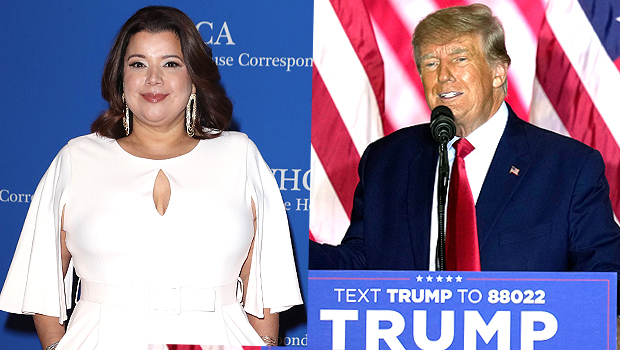 Ana Navarro had a very serious message for Republicans with the announcement that former President Donald Trump would run for office again in 2024. The View co-host warned that after the 2016 election, Trump was not a candidate to joke about on the show on Wednesday, November 16. She promised to keep on fighting to make sure that he doesn’t win another election in a clip that was released.

.@ananavarro: “We beat [Trump] once. We can beat him twice if we have to.”

“Under no circumstance can Americans get exhausted and not fight hard as hell so this guy is nowhere near the presidency ever, ever, ever again.” https://t.co/cVclFZQU98 pic.twitter.com/HVyH2AOwYY

As the co-hosts mocked Trump’s low-energy announcement at Mar-a-Lago, Ana, who is a Republican, said she was having a tough time finding humor in it. “Part of me wants to be with you laughing, but I’ve seen this movie before,” she said. “I made the mistake and many other Republicans made the mistake in 2016 of not taking Trump seriously. I’m not making that mistake twice. I’m telling you all. Don’t get numb to it. Don’t laugh about it. Don’t get tired of it. We beat him once. We can beat him twice.”

Aside from the warning to take Trump seriously, Ana also said that keeping Trump out of office would come down to the voters, and said that everyone fighting against him would have to keep up their fight. “What matters and is gonna make a decision is Republican-based voters who voted for Trump before,” she said. “We have to keep him out of the White House. Under no circumstance can Americans get exhausted and not fight hard as hell so this guy is nowhere near the presidency ever, ever, ever again.”

Ana hasn’t been the only one to call out Trump after he announced his 2024 run for the Oval Office. Trump’s longtime rival (and a View alum) Rosie O’Donnell also called him out in a tweet, which included a monstrous portrait of Trump that the comedian had seemingly drawn. “No human respects you,” she wrote of the former president. She also included the hashtag “#loserTrump.”

Besides The View co-hosts calling out Trump, they also spoke about one of the notable absences at the announcement: his daughter Ivanka Trump. The former senior advisor announced that she’d be sitting out this campaign in a statement on her Instagram. “I love my father very much. This time around, I am choosing to prioritize my young children and the private life we are creating as a family. I do not plan to be involved in politics. While I will always love and support my father, going forward I will do so outside of the political arena,” she wrote.

Alyssa Farah Griffin: 5 Things On The New Co-Host Of ‘The View’