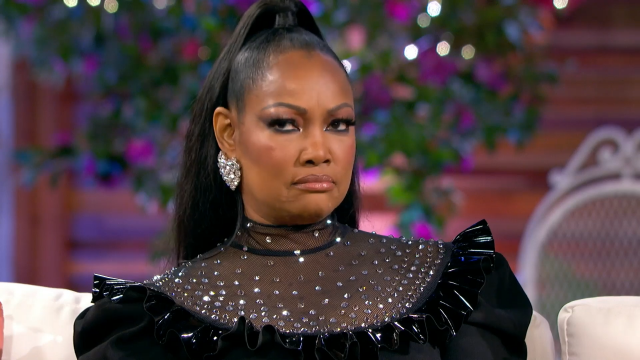 This entire RHOBH Reunion has been brutal to multiple cast members.

Garcelle Beauvais is no exception. But what struck a nerve with many viewers was the very different tone.

Watching from home, many felt that Andy Cohen — usually an attentive host, willing to dig into drama — had sort of checked out. Where Garcelle was concerned, anyway.

Now, Andy is apologizing. As he should.

Garcelle Beauvais had some things to hash out during the Season 12 Reunion.

That is normally what these end-of-season specials are for: updates, interrogations, direct communication, and talking through problems.

Now, Andy Cohen is issuing a public apology to her for not letting that happen. Specifically, not with Garcelle.

“Not only for diverting the topic,” he specified.

“But for not returning — even worse — to the serious conversation that was at hand,” Andy expressed.

“I have deep admiration for Garcelle,” Andy then strongly emphasized.

But when it comes to how he handled one segment of the Reunion, he absolutely has real regrets.

Garcelle knows it, too. He didn’t start with the public apology — he started by speaking to the actress herself, one-on-one.

He knows that it really felt like he didn’t seem interested in her take about the Lisa Rinna and Erika Jayne conflict.

“I should have been more in tune with her feelings,” Andy expressed.

Garcelle, it seems, was not the one who took Andy to task about his seeming disinterest.

Instead, it was fans and viewers who took to social media to air their grievances with the Bravo host.

“I just wanted to say,” Andy addressed his listeners, “that because I’ve been logging in and I get it.”

So what was the issue that Andy neglected to explore?

Well, for ages, the world believed that Erika Jayne had dramatically tossed Garcelle’s memoir, Love Me as I Am, into the trash.

But Erika’s stolen valor was misleading. Lisa Rinna was the culprit.

Garcelle was visibly emotional as this went down. Andy seemed to ignore that.

Instead, he chit-chatted with Lisa and with Erika — including some jokes.

Garcelle deserved her moment to respond. Andy didn’t mean to deny her that, but an accidental slight is a slight still.

Andy may not have noticed what went down, but a flurry of social media commenters certainly did.

“I am disappointed in your treatment of Garcelle during Reunion #2,” one person tweeted.

“You joined with  Rinna and Erika laughing about throwing her book in the trash and joking about recycling,” the fan lamented, “instead of addressing the real issue.”

“That was so disrespectful of Garcelle’s feelings,” another alarmed fan observed.

And a different person tweeted: “So wait, executive producer, Andy Cohen, watched this reunion before it aired.”

“And,” the Twitter user remarked, “thought it was OK to show himself and the mean girls make fun of Garcelle’s book being thrown in the trash?”

That tweet concluded: “So damn disgusting. He got a kick out of this scene.”

Some felt that Andy’s display of apparent favoritism merited finding a new host. Others saw it as simply a lapse in judgment.

Regardless, we are all happy that Andy responded well to the callout. He seems to have taken this topic to heart.