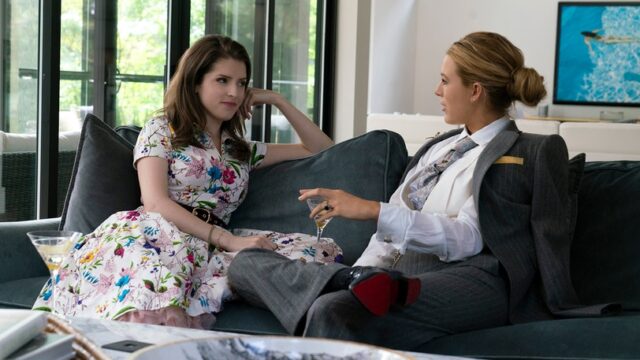 Get ready for more mystery, twists, yuppie passive aggression, and (hopefully) custom suits. A sequel to “A Simple Favor,” the hit 2018 thriller starring Anna Kendrick and Blake Lively, is on the way. Kendrick and Lively are returning for the new project, as are screenwriter Jessica Sharzer and director-producer Paul Feig. Deadline broke the news.

Based on the Darcey Bell novel of the same name, “A Simple Favor” sees an upper-middle-class parenting vlogger (Kendrick) trying to find out what happened to her missing best friend (Lively), a fellow mother at her son’s elementary school. It soon becomes clear that Lively’s character is not exactly whom she appeared to be.

“The pic was a critical and commercial success for Lionsgate,” Deadline notes, “earning more than $97 million at the worldwide box office, achieving Certified Fresh status on Rotten Tomatoes, and attracting a strong base that has been hoping for a follow-up after an ending that left things open for a potential sequel.”

No plot details on the “Simple Favor” sequel just yet, but it hails from Lionsgate and Amazon Studios and Feig’s Feigco Entertainment is producing. Feigco’s Laura Fischer will serve as producer and Sharzer will executive produce.

Kendrick received an Oscar nomination for her breakout role in “Up in the Air.” Her more recent credits include “Love Life” and “Stowaway,” and she counts Mary Nighy thriller “Alice, Darling” and Chloe Okuno’s true crime pic “The Dating Game” among her upcoming projects.

Lively is set to make her feature directorial debut with an adaptation of the graphic novel “Seconds.” Her best-known projects include “Gossip Girl,” “The Shallows,” and “The Town.” She previously directed the Taylor Swift video “I Bet You Think About Me (Taylor’s Version).”

Sharzer has written for and produced “American Horror Story,” “Star,” and “Nine Perfect Strangers.” She also directed, co-wrote, and co-produced “Speak,” the Kristen Stewart-starring TV movie based on Laurie Halse Anderson’s seminal YA novel about a teenage rape survivor.

Tiger Woods Seen Walking On His Own For The First Since Car Accident –...