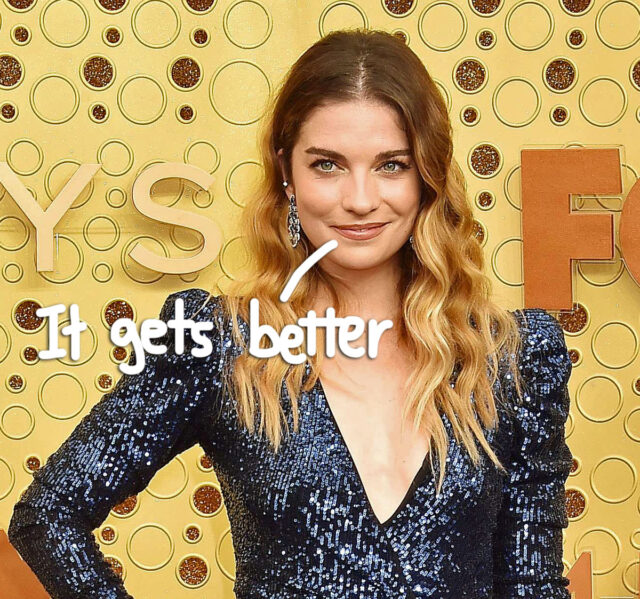 Annie Murphy knows a thing or two about the struggling with mental health. Opening up in an interview with The Zoe Report, the Schitt’s Creek alum revealed she was diagnosed with depression during the COVID-19 pandemic — something we’re sure readers can relate to. Before getting to the vulnerable chat, the actress confided:

“I think I have a big dose of my dad’s Irish melancholy.”

Except it was more than just “melancholy.” Annie later found out she was suffering from major depression during an especially trying time, with a quick visit to her parents’ house turning into a long stay due to lockdown. Meanwhile, the star’s new TV show, Kevin Can F**k Himself, was delayed for health and safety reasons, and sadly, things got dark fast.

Bottled up emotions that had been ignored while life was busier suddenly had full control, as Murphy recalled:

“My mom was like, ‘You’re crying 12 times a day hysterically, to the point where your teeth are chattering. That’s not normal.’”

Not normal but perhaps necessary in those crazy days!? Knowing she needed help, the 34-year-old met up with a therapist who diagnosed her with depression. Through a mix of tough conversations and antidepressants, the performer started to feel a lot better, expressing:

Menno Versteeg‘s wife will always be an advocate for antidepressants because they’ve helped her maintain a stable lifestyle, even today as things get back to a new normal!

“I do not cry every single day on the floor 12 times. I am able to focus on other things in my life.”

Getting to a point where she felt comfortable discussing her depression publicly was also a whole separate journey though. It’s no secret there remains a major stigma around mental health, but the added pressure of being a celebrity increased her fear of being honest. The Emmy winner explained:

“A lot of people are going to think that I sound like I’m playing a tiny violin for myself… [or think], ‘Oh, you’re rich and famous. Why the f**k are you sad? You have nothing to be sad about.’ But I’m not going to post photos of me covered in my own snot, lying on the floor, unable to get up. I don’t want people to have to see that.”

Wow… Even more reason we’re so happy Annie’s acknowledged her rough patch! No amount of fame should mean you can’t struggle from time to time. Also, fans should be glad she took the time to focus on her mental health since the Russian Doll star admitted being forced to address these issues ended up making her better at her job:

“As excited as I was to get this huge part on [Kevin Can F**k Himself], I do not think if I had gone to work when I was supposed to go to work I would have been able to do my job.”

Related: Kristen Bell Reveals How She & Dax Shepard Got Through Difficult Lockdown

While she was still coming out of “a real messy mental state” when production on the AMC series started, she was in a better state of mind to form new friendships and focus on work! And she’s f**king proud of herself for that!

“Not to toot my own horn, because I f**king hate that, but I do feel a sense of resilience.”

Yaaas! Scream it from the rooftops! Putting in the work and reaching out for help, pays off! Reactions, Perezcious readers? Sound OFF in the comments (below)!

Christine Brown Has a Blast on Thanksgiving, Very Clearly Doesn’t Miss Kody At All