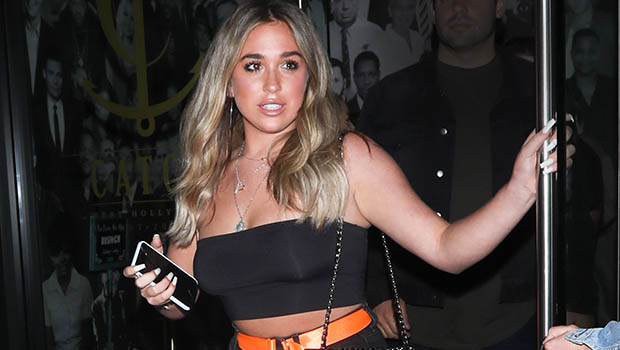 Sun’s out buns out! Don’t Be Tardy star Ariana Biermann, 21, showed off her bum in a sexy Instagram photo while on vacation in Palm Beach, Florida on Dec. 8. She captioned the snapshot with a mermaid emoji and even posed in the same straddle position on the surfboard as her sister, Brielle Biermann, 25, did on her own Instagram. In the photo, Ari sported a tiny white bikini and giant goggles for the ocean adventure. The beauty’s swimsuit is designed by Salty K, which Ariana also tagged on the post.

Soon a plethora of comments were posted to the TV personality’s photo, as fans were obsessed with the look. “HOT HOT HOT,” one fan wrote, while another chimed in, “MIAMI MAMIII.” Even Ari’s mom, Kim Zolciak, 44, took to the comments section to express her own thoughts. “Oh my!! Too grown up for me,” The Real Housewives of Atlanta star wrote, along with a series of red heart emojis. But Brielle, on the other hand, was completely supportive of the raunchy post. “My wife,” the 25-year-old penned.

The two sisters have been living it up in Palm Beach over the last few days, and clearly looking amazing while doing it! Brielle posted a similar photo, as mentioned above, on Thursday and Kim added a comment to this post too! “You get it from your mama,” the 44-year-old wrote. Many of Brielle’s friends took to the comments to gush over the sexy bikini photo, including celeb pal, Sistine Stallone, 24. “wish I was that surf board,” the daughter of actor Sylvester Stallone wrote.

Both of the swimsuit posts come two months after Ari celebrated her 21st birthday. Kim’s second to oldest daughter rocked a strapless bubblegum pink dress for the celebratory evening on Oct. 26. “infinite birthday,” she captioned the photo via Instagram. And her momma also took to Instagram to write Ariana a birthday tribute post. “Happy 21st Birthday to my sweet @arianabiermann I can’t believe how fast time has flown by!! It was me, @briellebiermann and you kid for years! Many highs and lows but we have the best memories Look [sic] us now,” the caption read. And on Oct. 10, Brielle posted a childhood photo of her with her baby sister to commence the birthday love. “1 week until my CHICKEN is 21!!! i can’t believe how fast time is flying by,” she wrote.

Ari and Brielle share the same mom, but do not have the same biological fathers. Brielle’s dad’s identity is not publicly known, however, she was adopted by her step-dad, Kroy Biermann, 37, when she was a teen. Ariana, for her part, was also adopted by Kroy when Kim married him in 2011, but her birth father is Daniel Toce, who Kim was married to from 2001 until their 2003 split. And during Kroy and Kim’s marriage they welcomed four kids together: Kroy Jr., 11, Kash, 10, and twins Kaia and Kane, 9.

Kim Zolciak’s Kids: Facts About Her 6 Children & Their Fathers