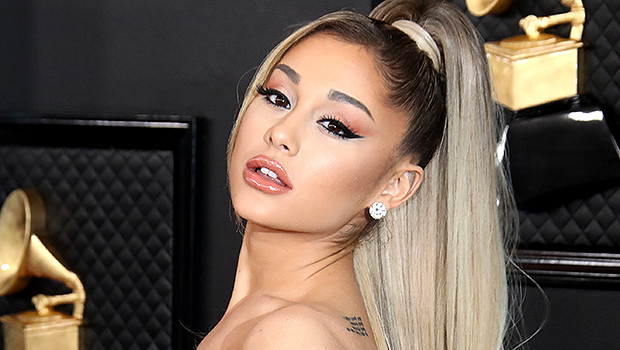 Ariana Grande slayed in a pink corset top for a fully glamorous new pic posted Thursday for her R.E.M. Beauty line, and we’re totally getting Madonna vibes! The “God Is a Woman” songstress, 29, looked stunning in a blush pink corset top that strongly resembled the iconic corset Madonna wore during her 1990 Blonde Ambition tour. Ariana placed her hands on her hips for the glam pic, which you can see HERE, and wore her hair in a sleek ponytail. She accessorized with what appeared to be diamond stud earrings and finished the look with a blush pink, matte makeup palette and a two-tone manicure.

“Chapter 4: out of body is available now! shop the new collection exclusively on http://rembeauty.com,” she captioned the jaw-dropping pic. Ariana reposted another version of the photo to her Instagram stories for her 324M followers on July 28. Fans of the beauty line were certainly there for it and took to the comments section on the R.E.M. Beauty Twitter account to react.

“Highlight of my day,” commented a follower, while another reacted, “she looks amazing.” “This chapter is my favorite,” wrote an R.E.M. devotee, with yet another commenting, “actually flawless. Some fans of the beauty line were way ahead of her. “About to buy some now! So excited for this!” commented a follower, with another reacting, “ordering already, so happy about chapter 4!”

Ariana Grande Then & Now: See Her Transformation From Nickelodeon Star To Pop Princess

Ari commented on her vegan/cruelty free new line in an interview back in November. “This is a special moment for me and team r.e.m.—I can’t believe that we’re at the point where we get to finally talk about it after working on it for two years,” she told Vogue HK over Zoom. “I am smiling so hard, my cheeks hurt!” She said she hoped the stunning line would “inspire” consumers. “Hopefully it will inspire people to express themselves in a new way and share that with the world,” she added.

Listen To This: Sweet Tooth!