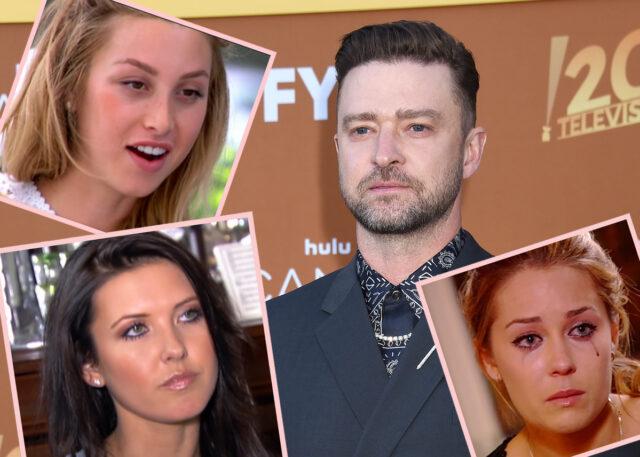 Audrina Patridge is telling all in her new upcoming memoir, Choices: To the Hills and Back Again! And she isn’t holding back when it comes to painting other celebs in a bad light!

In one spicy excerpt about surreal star moments, Audrina opens up about the 2007 VMAs when Justin Timberlake infamously disrespected them onstage — right after they presented him with his award!

She recounts from the upcoming book, via Page Six, that as the stars of one of MTV‘s biggest shows that year, she and co-stars Lauren Conrad and Whitney Port were given the honor of presenting Male Artist of the Year — a huge deal for them!

“Lauren and Whitney were beyond excited when Justin Timberlake won, because they were superfans. His wasn’t my kind of music, so I couldn’t have cared less, but I was excited for them.”

But this was one of those “never meet your heroes” moments. Things went awry right away, as she recalls:

“And then Justin wouldn’t even come up to us and accept the award in front of a packed house! Chris Brown came up onstage with him, took the award from us himself, and then presented it to Justin as we backed off to the side.”

She says JT completely ignoring them “devastated” Lauren and Whitney, but she just found herself “annoyed at his rude, diva behavior.”

Innerestingly, Audrina’s memory is a bit off there. JT shouted out Chris Brown in his acceptance speech, but it was actually his producer Timbaland who took the award and handed it to the artist. But she got his quote dead-on! She wrote:

“As if that wasn’t bad enough, Justin took center stage and said to the crowd: ‘MTV, play more damn videos. We don’t want to see The Simpsons or reality television.’”

Yup! That’s what he said alright! Relive the moment (below)!

The camera did not linger on the reality stars’ faces at that moment, but if it had viewers likely would have seen that the girls took it as a “personal attack.” Audrina writes:

“Lauren’s jaw dropped. We were humiliated.”

That makes sense. Lauren told Us Weekly years later that she had been the biggest JT fan for so long — and that moment crushed her!

“I have always loved him, and he was a disappointment at the VMAs. Whitney and I presented him with an award. We were so excited, and he wouldn’t even take the award from us. Then he went up to the microphone and insulted reality television on MTV. We were standing up there smiling, and I felt so stupid. It was probably the end of my love for him.”

Aw, that’s really sad! We understand a music lover missing the days of non-stop music on MTV, but he didn’t think for a second about the fact these three young women on the stage with him might be fans — that this might be a big deal for them. How self-centered can you get??

The silver lining to that evening? Meeting a much more down-to-earth pop star! Audrina writes:

“Fortunately, not everyone was as rude [as Timberlake]. Our table was right next to this up-and-coming artist and her mom. Maybe you recognize the name Rihanna?”

It rings a bell… Ha! She remembers more fondly:

“I spent a while chatting with her and her mom that night, and she couldn’t have been nicer. She was probably one of my favorite people I’ve ever met at an awards show.”

Awww! Now that’s a memory to last a lifetime!