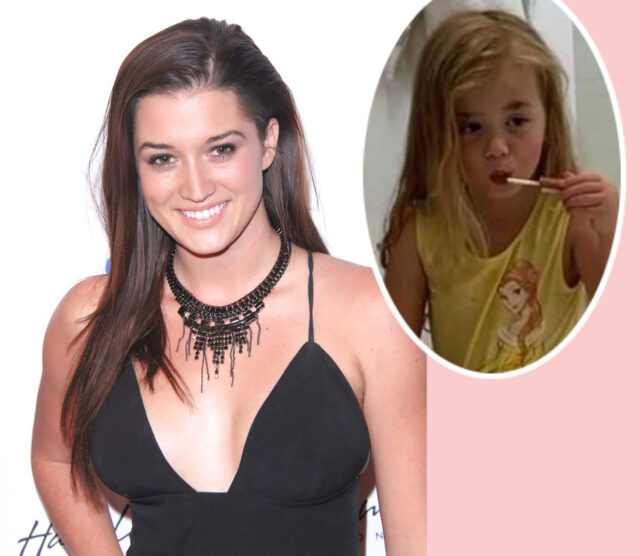 Jade Roper took to social media this week to clap back at critics who took issue with the Bachelor in Paradise vet posting sweet snaps of her daughter Emerson doing her own makeup.

The inciting pics were shared on the starlet’s Instagram Stories over the weekend, and saw the tot putting on eyeshadow and lip gloss from her mom’s makeup collection. Jade captioned one snap of her daughter post-makeover:

“She wanted to get ready with me.”

Naturally, many fans gushed over the adorable images (below) — but some IG users felt the need to warn Jade that she might be sending the wrong message to her 4-year-old.

One user in particular told the 34-year-old that the makeup was “subconsciously” sending the message to her toddler that she was not “beautiful enough” without it, adding:

“I respect whatever you decide, just reminding wearing makeup may subconsciously tell her she needs it because she’s not beautiful enough.”

Jade had little patience for the armchair psychologist. She wrote back:

The reality star issued a longer response on her IG Stories. While sharing a screenshot of the exchange, she wrote:

“Maybe we all should just become robots with zero emotions and zero interest or curiosities and have zero fun.”

Seriously though! Of course, Jade should know by now that when it comes to celeb mommas, every post has a pooper.

The 34-year-old shares Emerson with hubby Tanner Tolbert, whom she tied the knot with in 2016 after meeting and becoming engaged on Bachelor In Paradise. The couple also share sons Brooks, 1, and 9-month-old Reed Harrison.

As fans know, Jade suffered a traumatic experience when giving birth to Brooks. After going into labor early, she welcomed the newborn in her bedroom closet — which left her dealing with PTSD for almost a year. She explained in a recent interview with Today:

“From the second I went into labor until pretty much until I got pregnant with my (second) son Reed, I was dealing with post-traumatic stress disorder… When I was giving birth, I had such a precipitous labor I thought something wrong was happening. I thought that he was going to die. I thought I was going to die.”

“And so after that experience, I would have flashbacks. That we were… not safe. And I would get bouts of dizziness out of nowhere, where it was almost like vertigo. I would have intrusive thoughts that weren’t healthy. It was really intense for me.”

Jade admitted she didn’t immediately feel connected to her new son and stopped taking good care of herself. But eventually, she began treatment with hypnotherapy and found herself pregnant again five and a half months later. Fortunately, the hormonal changes helped Jade’s mood — and she made sure to start asking for more help when she needed it.

So, yeah, this momma definitely deserves some fun with her daughter — without the judgement of others!

Do U agree, Perezcious readers?

Becky Read’s “The Fight Before Christmas” Doc Acquired by Apple

Chrissy Teigen Wants Her Old Life On Social Media Back Amid Depression Over Being...