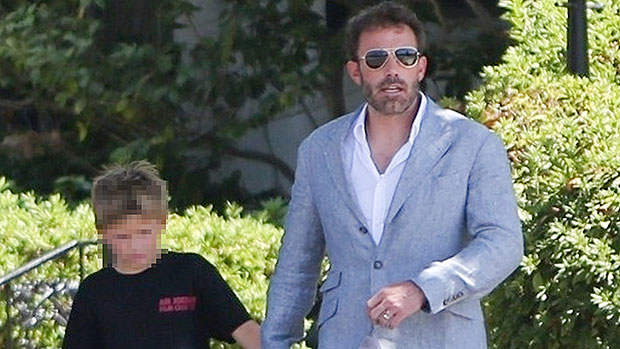 Ben Affleck, 50, bonded with his son, Samuel Garner Affleck, 10, on a stroll in Santa Monica! The father-son duo were spotted after Ben returned from his Italian honeymoon with his new wife, Jennifer Lopez, 53. Both Ben and Samuel looked very happy to have some one-on-one time together as they enjoyed the sunny day on Thursday, Sept. 1. The Gone Girl actor held onto his son’s hand lovingly while they were out and about for the summer stroll.

For the casual outing, Ben looked very handsome in his summer linens, opting for light beige pants and a crisp white button-up. The newlywed looked added a light blue sports coat over top, channeling the South of France with his chic look. He also accessorized for the sunny day with a pair of gold-trimmed aviator sunglasses, white sneakers, and of course, his new wedding band.

Sam, on the other hand, kept his look more casual for the outing: the 10-year-old wore a black t-shirt paired with blue jeans and black athletic sneakers.

The preteen is Ben’s youngest child, along with two daughters with his ex-wife Jennifer Garner, 50. The former Hollywood couple also share Seraphina Rose Elizabeth Affleck, 13, and Violet Affleck, 16, together.

The casual stroll took place just a little over a week after Ben and Jennifer got married for the second time at his estate in Georgia. Bennifer 2.0 hosted a wedding extravaganza the weekend of August 19, just one month after the duo secretly tied the knot in an intimate ceremony in Las Vegas in July. Their l was attended by some of the the couple’s famous pals like Matt Damon and his wife, Luciana Barroso, as well as George Clooney, Jane Fonda and Renee Zellweger.

Ben and J.Lo shocked the world when they rekindled their legendary romance all over again back in April 2021, following Jen’ss split from ex-fiancé Alex Rodriguez, 47. By April 2022, the “Let’s Get Loud” singer and Ben were officially engaged for the second time.

The popstar and actress has children as well, making her new family with Ben one big blended crew! Jennifer and Marc share their twins, Max and Emme, 14, who were in their wedding party along with Ben’s three children.