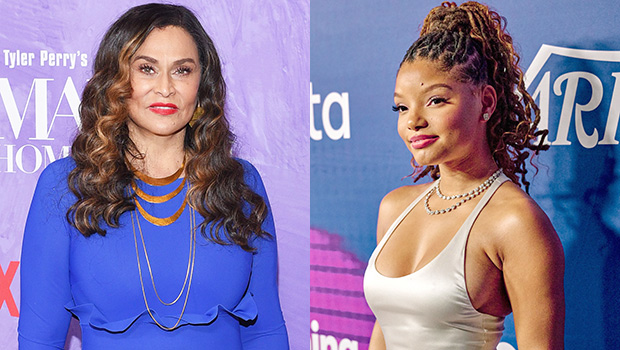 Halle Bailey, 22, is receiving lots of love, as well as some unfortunate criticism, regarding the upcoming live-action Little Mermaid movie. After the first trailer was released by Disney on Sept. 9, so many fans and fellow celebs praised Halle for her historic role as Ariel. But Halle’s also been subject to racism criticism ever since was cast in the lead role of the Disney film way back in July 2019. Beyonce‘s mother, Tina Knowles, has been one of the most vocal celebrities to support Halle amidst the controversy.

On Sept. 14, Tina shared a video of Halle talking about portraying Ariel in The Little Mermaid when she appeared on Tina’s Facebook Watch show. Tina praised Halle and shared lots of love to the 22-year-old in her social media message.

“I remember talking about her role as Ariel to the beautiful And Super talented @hallebailey on my show ‘Talks with Mama Tina,’ ” Tina wrote. “She and her beautiful sister @chloebailey. She spoke about the pressure of filling the shoes of past Little Mermaids Roles. Well we could not be more excited or proud of you as Ariel. You are changing our little black girls perspective on them being not limited to certain spaces and to be seen!!!! Kudos beautiful Halle.”

More celebrities have followed Tina’s lead and have spoken out against the racism aimed at the new Little Mermaid star. See who’s been publicly supporting Halle below.

Trevor Noah condemned Halle’s racist critics on the Sept. 15 episode of The Daily Show. He noted that the trailer’s received over 1.5 million dislikes on YouTube, and spoke out against critics who think Halle can’t play Ariel since she’s Black. “Really, people — we’re doing this again?” Trevor said. “Nothing like? They both have the tail, they both have the red [hair]. Once again, a bunch of Internet racists are upset that a fictional character is being played by a Black person. Honestly, I don’t know what the big deal is.” Trevor continued, “Stop being ridiculous. It’s imaginary. I hope this scandal doesn’t overshadow the rest of the movie. The Little Mermaid is a beautiful story about a young woman changing her core identity to please a man. Let’s not forget about that, people.”

Holly Robinson Peete supported Halle in the comments section of Tina Knowles’ post. “This was so amazing! We are all so proud of her!!” Holly wrote, in response to the video of Halle talking about her Little Mermaid role.

Real Housewives of Atlanta star Kandi Burruss similarly shared some love to Halle, amidst the racism controversy, in the comments section of Tina’s video. Kandi dropped three heart emojis to show her support for Halle.

Actress Daryl Hannah defended Halle being cast as Ariel on Twitter a few days after the first Little Mermaid trailer came out. “The little mermaid is black I met her there! #dontbearacistdork,” Daryl said on Twitter.

The little mermaid is black
I met her
there!#dontbearacistdork

Jodi Benson, who voiced Ariel in the original The Little Mermaid, vocalized her support for Halle on her Instagram Stories. “Halle, you were absolutely amazing!” Jodi wrote, alongside a photo of Halle and director Rob Marshall at D23 Expo. “I’m SO proud of you and your beautiful performance as Ariel. It was so wonderful to celebrate with your family here at at D23 Expo.”

Trailer Watch: Dina Amer Examines Trauma and Sisterhood in “You Resemble Me”

Janelle Brown: Did Christine FORCE Her to Leave Kody?!