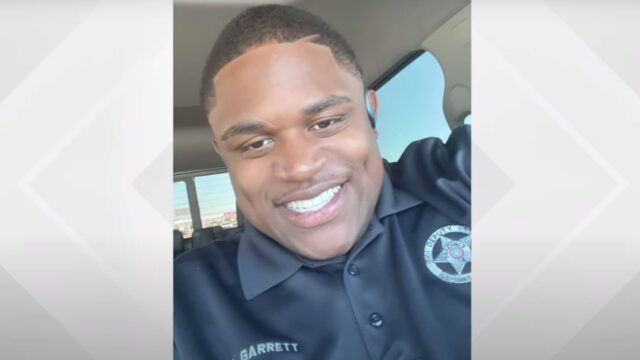 A Black Texas police officer has multiple damaged organs following a shooting at a bar on Saturday (October 16) that left another deputy dead.

According to KHOU-TV, Harris County Constable Precinct 4 Deputy Darryl Garrett has undergone several surgeries in order for doctors to remove bullet fragments that damaged some of his organs. Lajah Richardson, the 28-year-old’s fiancée says he’ll need a kidney transplant following having his gallbladder removed.

Garrett was responding to a possible robbery in the parking lot outside of a bar with fellow Deputy Kareem Atkins. KHOU reports that the pair were attempting to arrest a suspect when a second suspect appeared and opened fire with an assault rifle, striking both officers.

A third officer, Jaqaim Barten, 26, heard the shots and rushed to help but was immediately shot and immobilized.

RELATED: Black Special Police Officer Punches White Trump Supporter And Both Are Charged With Assault A Day Before Capitol Riot

“They were telling him he had to leave from the establishment and it just went left from there. He got upset,” Richardson told the news station.

Atkins, 30, died from the gunshot wound. He had recently returned from paternity leave and had served at the precinct since January 2019. He leaves behind his wife and child.

Because Garrett is in critical condition, Richardson says she hasn’t told him one of his best friends is dead and doesn’t know how she’s going to tell him.

“They call each other brothers. They do everything together,” Richardson said.

Richardson describes Atkins as a great officer, friend and husband, and explained the difficulty of no longer having him around.

“He is a hardworking man. Took care of his family. He made sure if you need anything he was coming through for you,” she said. “Everyone loved him he had no problems with nobody.”

As for Barthen, Richardson says he’s in stable condition and remains in the hospital.

A GoFundMe has been set up to help officer Garrett cover medical expenses as he faces a long recovery ahead.