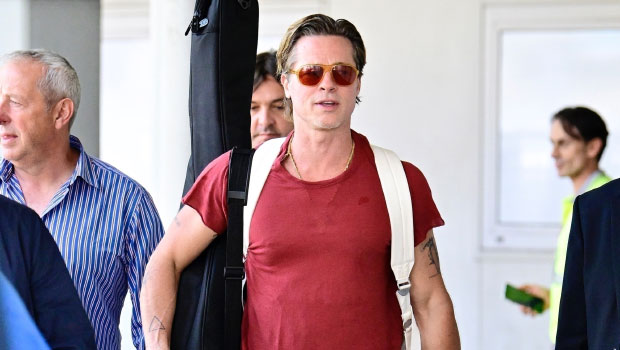 Bullet Train star Brad Pitt brought his charm, and music, to Italy for the Venice Film Festival! The actor, 58, was seen ahead of the big event rocking rainbow sneakers, along with a cheery expression for fans. The Fight Club actor also wore comfy maroon sweats for the Italy outing and carried a guitar case slung over his shoulder and a white backpack on his back. Brad finished the uber-casual look with orange sunglasses, layered bracelets, a watch, and a couple of statement rings. He also wore a necklace tucked in under his shirt.

Brad’s appearance comes on the heels of a slew of colorful European Bullet Train premiere appearances in July. The actor broke the internet by modeling a skirt and chunky boots at the film’s Berlin premiere and showed off a dramatic karate kick for photogs on the red carpet in Paris. For his next act, he slayed a hot pink suit for the movie’s South Korea event.

Brad’s high-spirited appearances belie family drama, however. Amid a volatile divorce from ex-wife Angelina Jolie, 47, the father of six has reportedly been “pushing” to see his children Shiloh, 16, Zahara, 17, and twins Vivienne and Knox, 14. The former power couple also share Maddox, 21, Pax, 18, though they are now legal adults.

Per Us Weekly, Brad “pushes to see” the children “as often as possible wherever they are in the world.” The outlet’s insider also said in the August report that the Legends of the Fall actor “cherishes every moment he gets with the kids. He loves being a parent and has tried to make the best of a tricky situation given how hostile it’s been with Angelina.”

The source also noted that “He flew to Italy for the twins’ birthday and that meant a lot to them, plus he made a big fuss of Shiloh on her 16th.”

Damien Chazelle’s ‘Babylon’ Movie: The Cast, What To Expect & Everything Else We Know