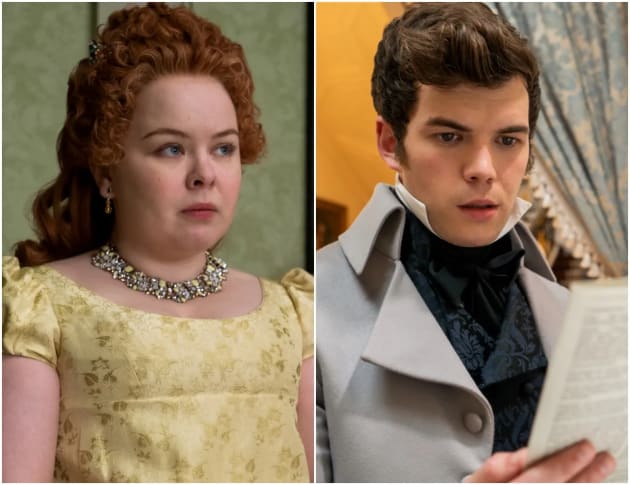 
And we’ve got a feeling that most of you will be VERY happy with what she has to say.


On Sunday night, during a Bridgerton For Your Consideration panel in Hollywood, actress Nicola Coughlan dropped quite a gigantic spoiler on fans of Bridgerton, thhe Netflix drama that takes viewers into the world of dating, love, romance and (a lot) of sex during the Regency era in England.


Looking ahead to Season 3? Which will likely drop in very late 2022?


Coughlan said the main storyline will focus on her character of Penelope Feathington, along with Penelope’s long-standing crush, Colin Bridgerton (Luke Newton).


This is notable because Penelope and Colin’s love story is told in the fourth book of Julia Quinn’s beloved series, Romancing Mister Bridgerton, rather than the third.


“Like Lady Whistledown I’ve been keeping quite a big secret for quite a long time,” Coughlan added on Instagram. “But I can finally tell you that @bridgertonnetflix Season Three is Colin and Penelope’s Story.”


During the Season 2 finale of Bridgerton (SPOILER ALERT!), Penelope — who has had a crush on Colin pretty much since the moment we met her — overheard her preferred spouse say he would “never dream of courting” her.


Coughlan, meanwhile, learned she would be Bridgerton’s next featured heroine during what she presumed would be a routine phone call last year with Season 3 showrunner Jess Brownell.


“I feel like if you see Penelope fawning over this boy for another season, you’ll be like, ‘Get it together! Come on, move on and get over it,’ ” Coughlan said at the aformentioned event, adding:


Creator Chris Van Dusen stepped down as showrunner following Season 2, and Brownell spoke to Variety on Monday about his decision to deviate a bit from Quinn’s chronological order of storytelling, telling the outlet:


“I really feel like it’s Colin and Penelope’s time.


“Because we’ve been watching both of these actors on our screens since Season 1, we’ve already invested in them a little bit. We know who they are as people.


“I feel like, especially in the last season, there are these moments of tension between them where it’s like, Colin walks up to the line of almost realizing that Penelope has feelings for him but doesn’t quite get there.


“Instead of treading water on that dynamic, we wanted to push it into their season. It really felt like the perfect moment to tee it up.”


Netflix has not yet confirmed a premiere date for Season 3.


We do know, however, that the role of Francesca Bridgerton, previously played by Ruby Sokes, will be recast.


Because Sokes landed the lead in Netflix’s “Lockwood & Co.,” she has exited the Shondaland show and has been replaced by Hannah Dodd.


Brownell assured fans, via this same Variety interview, that Bridgerton won’t be ending any time soon.


“Shonda Rhimes has said publicly before that she wants to have eight seasons,” she said on Monday.


“We hope to get to tell every sibling’s love story and they will always be in each season.”