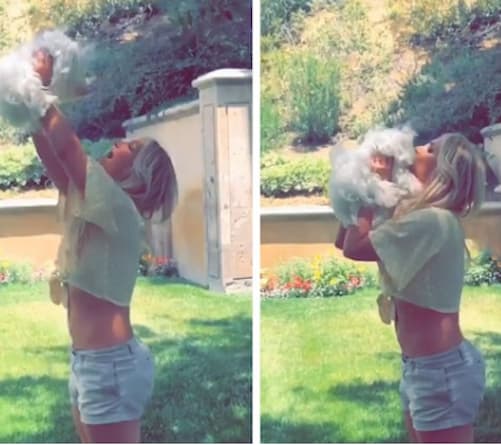 As you may have read about this week, Britney Spears has been accused of attacking her housekeeper.


Sources close to the artist swear she is innocent, but the aforementioned employee alleges that Britney grew irate at the disappearance of her dogs… blamed the employee… and then slapped a cell phone out of the employee’s hands in anger.


We can’t say for certain whether this happened or not.


It’s hard to get overly worked up over the possibility that Britney committed assault againt a phone, not a person, if this allegation is even true.


There’s a corollary to this story that is now coming into focus, however.


And it’s far more disturbing than any interaction between Spears and her housekeeper.


According to TMZ insiders, the artist’s two dogs had been taken away days before this confrontation, with Britney’s seemingly awful dad having ordered the housekeeper to remove them from the house.


Again, we don’t know whether or not Jamie Spears played any role in any of this.


But TMZ how now detailed some allegedly awful examples of animal abuse and neglect, even reporting on Friday that one of the superstar’s canines recently fell “seriously ill” and was “on the verge of death.”


Insiders have told this celebrity gossip website that the housekeeper was concerned about this pet, believing it could only be saved via an emergency trip to the vet.


The dog was never returned to Britney.


And this is what caused the major argument, which a rep for Spears does confirm took place… he/she simply insists it never turned physical.


TMZ also quotes sources with direct knowledge who explains that one of Britney’s two dogs has major digestive issues — and both canines were supposed to be fed a special type of food.


However, they were often instead given being table scraps, which prompted the pets to become very sick.


The housekeeper also claimed both dogs were dehydrated from a lack of water, a major reason in her decision to take them in to receive professional care.


At that point, TMZ continues, the dogs were examined and there was enough concern on the part of the dog sitter to NOT bring them back to Britney’s home.


Spears called the police on August 10 due to the apparent kidnapping of her pets, thinking that her estranged father must have been behind the dastardly act.


The singer was reportedly prepared to file an official report, but then changed her mind.


To bring this all back to the alleged assault, the housekeeper told the cops last this week that she showed Britney a photo of the sick dogs on her phone.


Britney then believed that the employee had sent this photo to her dad, reaching aggressively for the phone and either slapping it away or striking the housekeeper’s arm in the process.


According to Britney’s camp, however, the artist simply snatched the phone away — and nothing more.


As of Friday afternoon, the dogs were still not back at Britney’s home and a police investigation remained underway.

Amelia Hamlin & Lisa Rinna Are Both Just Trolling Us At This Point –...