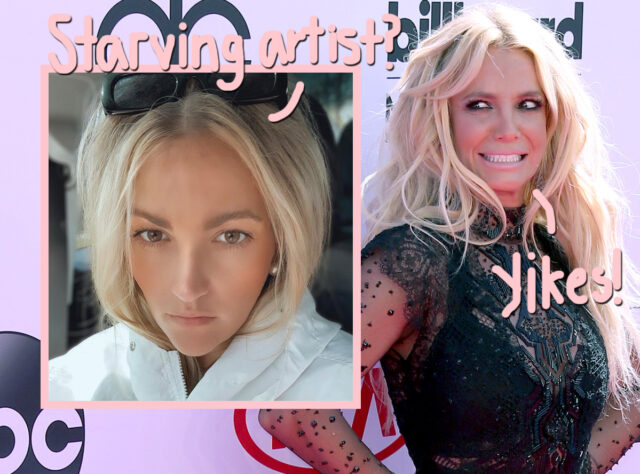 Britney Spears‘ bombshell testimony sent her family in a tailspin.

While Jamie Spears was identified as the main culprit of her conservatorship miseries, Brit said her “whole family” shared the blame. And since her virtual appearance in court, we’ve gotten more details that illustrated how the Spears clan was implicated in the situation. Lynne Spears apparently enabled her ex-husband to take the reins of her daughter’s life, while her brother Bryan joined their parents on the pop star’s payroll, according to the New Yorker.

One person who’s culpability is less clear is little sis Jamie Lynn Spears — but the actress is using the fact that her name DIDN’T appear in Ronan Farrow’s investigation as proof of her innocence. The Zoey 101 star reposted a headline to her Instagram Story that read:

“Britney Spears’ sister Jamie Lynn shares photos of her home life… after it’s revealed she is the ONLY family member not on singer’s payroll.”

The 30-year-old added the caption:

“Broke-ass”? Umm, last time we checked, JLS was on a hit Netflix show (Sweet Magnolias) that’s currently filming its second season. Just a few days ago, she was asserting that she “paid [her] own friggin’ bills since [she] was 10 years old.” And now she’s “broke”? Seems like she’s playing fast and loose with the word “facts” here.

And let’s not forget that Jamie Lynn was named trustee of the singer’s estate, and last year was maneuvering to create “blocked accounts” with her sister’s money. It was unclear what the Nickelodeon alum’s endgame was there — whether she was trying to help or take advantage — but it seems like she’s involved herself in Britney’s situation just like the rest of the fam.

It was only last week that a family friend claimed Lynne was the family member “NOT on Britney’s payroll.” Whether or not that’s been strictly true over the last decade, the Spears matriarch does appear to be making serious moves to help now. She filed a petition requesting the Crossroads actress be able to hire her own lawyer after the resignation of Samuel D. Ingham III. And now that these wheels are in motion, Britney’s starting to gain optimism, according to a source for E! News.

“She’s finally feeling hopeful about the future. She thinks people are resigning because they know she is speaking the truth. She is relieved her attorney resigned and hopes that if she can pick her own lawyer, it means the judge is leaning towards terminating the conservatorship.”

“She’s trying to be patient and see what happens. She is happy that things are starting to happen, and that the truth has finally come out.”

We do hope to learn the FULL truth someday — especially about the Spears family. But for now, the most important thing is Britney getting control back and being able to lead a full, healthy life on her own terms.

Denise Richards: Could She Actually Return to The Real Housewives of Beverly Hills?

Meri Brown Shows Support for LGBTQ Community: “I Have Your Back”