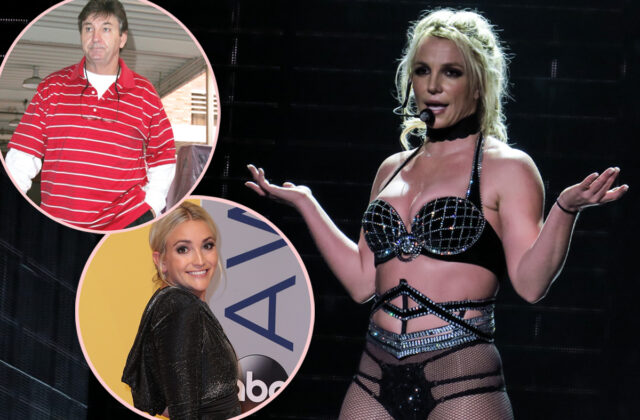 Holy s**t, Britney Spears did not hold back!

After calling out her fake supporters in an Instagram post, the 39-year-old pop icon hopped on the ‘gram again on Saturday to double-down on her previous message by shutting down the people who dislike her dancing videos and calling out her father, Jamie Spears, and sister, Jamie Lynn Spears. Spears began, explaining why she would not be returning to the stage anytime soon:

“For those of you who choose to criticize my dancing videos … look I’m not gonna be performing on any stages anytime soon with my dad handling what I wear, say, do, or think!!!! I’ve done that for the past 13 years … I’d much rather share videos YES from my living room instead of onstage in Vegas where some people were so far gone they couldn’t even shake my hand and I ended up getting a contact high from weed all the time … which I didn’t mind but it would have been nice to be able to go to the mother fucking spa!!!! And no I’m not gonna put on heavy makeup and try try try on stage again and not be able to do the real deal with remixes of my songs for years and begging to put my new music in my show for MY fans … so I quit !!!!”

Related: Britney Spears’ ‘Main Goal’ With New Lawyer Is NOT To End Conservatorship!

Wow! As you may know, the last time Britney performed was during her Piece of Me tour in 2018, which consisted of 31 shows that were based on her popular Las Vegas residency. During her powerful court statement on June 23, the pop sensation revealed she was constantly restricted from the simplest of desires, including getting her nails and hair done just the way she wanted, under her oppressive conservatorship. During her latest testimony, Britney told the judge she wants to press criminal charges against her father due to the “abuse” she faced in the legal arrangement, saying:

“I want to press charges against my father today. I want an investigation into my dad.”

Elsewhere in the post, Britney specifically called out her sister for performing her song Till The World Ends at the 2017 Radio Disney Music Awards as a tribute:

“I don’t like that my sister showed up at an awards show and performed MY SONGS to remixes !!!!! My so-called support system hurt me deeply. This conservatorship killed my dreams … so all I have is hope and hope is the only thing in this world that is very hard to kill … yet people still try.”

The momma of two also acknowledged the recent documentaries about her, expressing how she did not appreciate them bringing up “humiliating moments from the past.” And she ended her thoughts by saying all she has is hope and if people don’t enjoy her dancing clips they can simply unfollow her:

“For women who say it’s weird the way I still have hope for fairy tales … go f**k yourself. As I said … hope is all I have right now … you’re lucky I post anything at all … if you don’t like what you see, unfollow me. People try to kill hope because hope is one of the most vulnerable and fragile things there is !!!! I’m gonna go read a mother fucking fairy tale now !!!! Psss if you don’t want to see my precious ass dancing in my living room or it’s not up to your standards … go read a f**king book.”

DAYUM, Britney! You can ch-ch-check out the entire message (below):

As we mentioned before, the post comes after Britney called out the people who only started publicly supporting her now. Many fans believed she seemingly called out her mom Lynne Spears and Jamie Lynn, and this new charged statement may have just confirmed the latter.

Reactions, Perezcious readers? Sound OFF with your thoughts in the comments (below)!