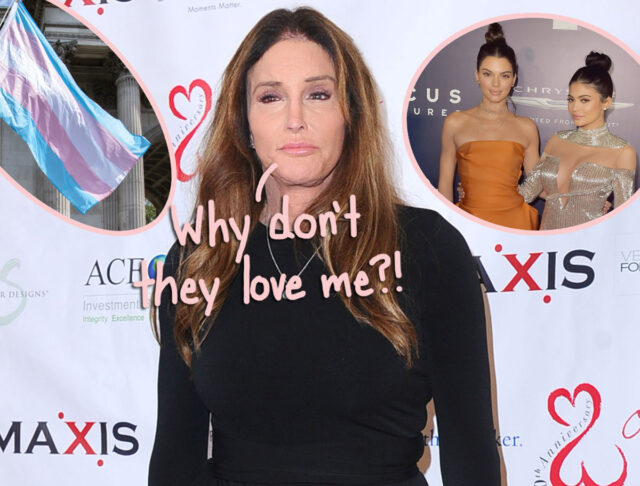 Even after all these years, it seems like Caitlyn Jenner still doesn’t understand why she’s such a polarizing figure in the public eye — and specifically, within the transgender community.

How is this possible?! And what will it take to get through to her??

The Olympic gold medalist and sports hero went on the Skinny Confidential Him & Her podcast this week for a brand new interview, and on the show, she opened up a good deal about her status as an outcast.

But rather than look critically at the unbelievable financial and social privileges she had even before making her transition back in 2015, Caitlyn still seems hung up on the politics of it all. Girl, come on…

On the podcast, the topic arose when host Michael Bosstick brought up the differences in how people reacted to Elliot Page‘s coming out late last year as opposed to Caitlyn’s own experience several years ago. And when Bosstick asked whether Caitlyn felt the varied reaction within the community to her transition was due to a “double standard,” the 71-year old Malibu resident gave an eye-opening response:

“I gotta be very careful with that. The trans community is probably more critical than the general public. I have a job. I’ve been successful. I have white privilege, celebrity privilege. I’ve had every privilege there is in the world. And for that, you can’t be a spokesperson for the community.”

Ummm… WOW! There’s a lot to take in there!

Caitlyn, really??? Ever think that maybe they’re critical (of you!) because you have s**tty politics and cultural views that do more harm to the community than good?! Just a thought! Just because a group of people is critical of you, it doesn’t mean they are “more critical than the general public.” It could just mean you have some s**t you need to work on in your life, and they are rightfully calling you out for it!

Related: Caitlyn Reveals How She First Found Out About The End Of KUWTK On Cable

Beyond that disappointing beginning, the KUWTK alum quickly doubled down on her Republican beliefs, refusing to explore how the conservative perspectives she backs often work to make life more difficult for non-rich, non-white transgender people.

“It’s been disappointing [because] I thought I could really make a difference and change the world, And in a lot of ways I did just being myself. But I mean, I try to do things politically. Near the end, I would help some of the organizations here in the Los Angeles area and they would have an event that I helped pay for and they would ask me not to come ’cause I’m too controversial.”

Again, there’s a reason Caitlyn is so controversial!

It’s wild to see her make herself out to be a victim while at the same time openly acknowledging her other-worldly privilege. The cognitive dissonance is real, y’all!

Clearly frustrated by the last five years of politics and criticism, Caitlyn summed it up by adding:

“I’ve had members of the community just tear into me and that’s like, ‘Guys, I’m only trying to help them. I’m here to help.’ And, well, I never have been [liberal], and I never will be, you know? I feel like my greatest contribution that I can make is just being out there, without trying to change the world. Just be out there, do shows.”

Back on the family front, Jenner also dished about her daughters on that podcast interview.

She’s referenced this aspect of their relationship in the past, but the talented amateur golfer doubled down on how much she loves to do fun, athletic stuff with 25-year-old daughter Kendall Jenner, even if she’s tougher to read:

“Kendall and I have a lot in common. She’s very athletic. We kind of both had the same attitude towards life and get along very well, but Kendall’s off kind of doing her thing… she’s a little more secretive. We’re still very close, but it’s kind of harder to figure out.”

And that’s lead to an interesting phenomenon: her younger sis, 23-year-old Kylie Jenner, has lately been the one stepping up to pursue family time!

Related: Caitlyn Is Rooting For Scott & Kourtney To Get Back Together!

“Kylie’s more of an open book. You know, I had dinner last night at Kylie’s house. Once every two weeks I go over there and she always has these great meals prepared. [It’s just] Sophia [Hutchins], Kylie, and myself, and just three of us, nobody around… we talk for an hour and have a glass of wine and talk about stuff and this and that. And so from that standpoint, we’re a lot closer.”

What do U make of Caitlyn’s comments here, Perezcious readers? It certainly seems like there’s no love lost between her and the transgender community… but will this interview do more damage to her rep? Or is she already so far on the outs that it doesn’t matter?!

Were you surprised by anything she said here?? Sound OFF with your take on everything down in the comments (below)…

Ella Johnson: I Never Actually Cheated on Johnny! AND We’re Coming Back on Another...