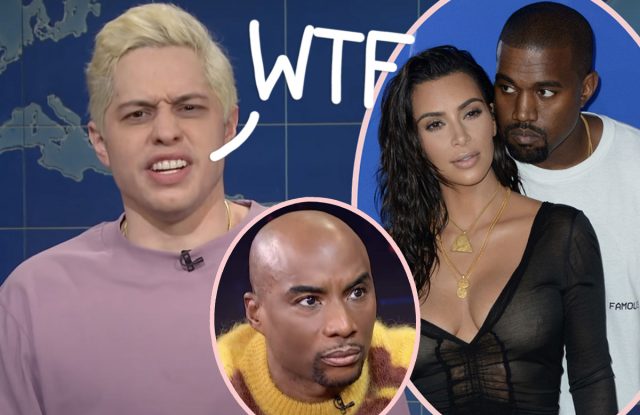 Look, it was always clear Kanye West was threatened by Pete Davidson while the comedian was dating Kim Kardashian! But now we know the biggest reason.

That’s according to radio personality Charlamagne Tha God, at least. In a new podcast ep, he’s revealing jaw-dropping details about what Ye supposedly said (er, screamed) at him about Pete’s huge penis! Jeez!!!

So this all started late last year, right after Kim and the Saturday Night Live alum first started dating. Charlamagne, who considers Pete a close friend, went on his radio show and joked about the comedian’s supposedly sizable member. He certainly hasn’t been the only one to reference this claim, the man is the source of the term “BDE.” So it’s not like the radio star was breaking new ground or anything.

But since Charlamagne is also close with Ye, he says heard soon after from the Chicago-born rapper about it! And their conversation was apparently INTENSE!!

Ye alluded to this issue during his sit-down on Drink Champs this past weekend. In the controversial (and since-scrapped) longform interview, the Jesus Walks performer criticized Charlamagne for openly talking about Pete’s penis on air:

“Charlamagne, you know, he’s gonna go on air and be like, but I’m gonna paraphrase it, ‘Kim is with Pete because he got a bigger d**k.’ Why you talking about another man’s d**k on camera?”

Now, in the latest episode of the Brilliant Idiots podcast, the Power 105 radio personality took the time to give his response. Speaking with podcast co-host Andrew Schulz about the “argument” he had with Ye over Pete’s manhood, Charlamagne confirmed the quarrel took place last November.

At first, he recalled being offended that Ye was trying to drive a wedge in between him and Davidson:

“He’s basically trying to get me on board to s**t on somebody he knows is my friend, Pete Davidson. He’s like, ‘We got to save the new Marilyn Monroe,’ talking about Kim. I’m like, ‘You know Pete is my friend, right?’”

But it gets SO much more intense from there!

After he pushed back on Ye’s anger, the Hurricane rapper allegedly went OFF!! Charlamagne claimed Kanye began yelling loudly at him about Davidson’s d**k, supposedly screaming this:

All Ye’s talk about being a genius, and he’s just like every other guy — threatened by the idea of his woman being served some bigger, better D. And that’s why he sent his legion of fans to bully Pete? He’s like the bad guy in an ’80s high school movie. Pathetic.

While Schulz was going crazy in the co-host seat, Charlamagne laughed about the old memory. He also admitted how, even at the time, he thought Ye’s rant about the contents of Pete’s pants was absurd:

“What am I supposed to do but laugh at that?”

Charlamagne also recalled how he brought up Pete’s size again in March of this year — and he’s not afraid to do it over and over simply because Ye takes it so badly! The radio DJ explained:

“The reason I keep bringing up Pete’s penis on the radio is because I know it f**ks with you [Kanye], and you said that to me. But he gets on the interview [Drink Champs] and acts like he doesn’t know where that came from. The motherf**ker is a master manipulator.”

Well damn!! Is Ye playing 4D chess after all? Or did he genuinely never understand what was going on?

You can watch the new Brilliant Idiots exchange about Kanye’s alleged d**k rant (below):

Pick of the Day: “Leonor Will Never Die”