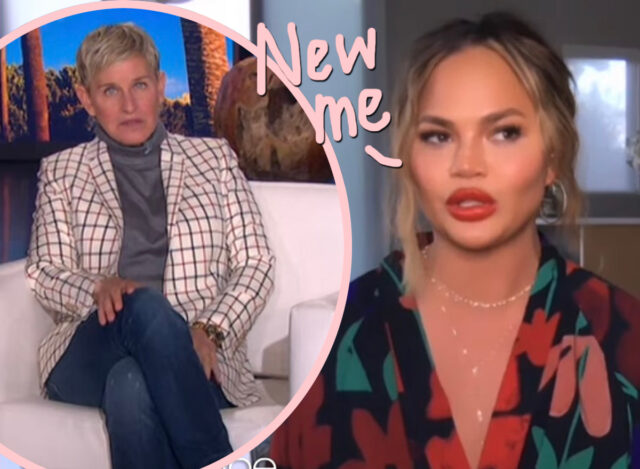 Chrissy Teigen’s continued openness about her pregnancy loss is a gift to all of us.

Not only has Chrissy kept the memory of her son Jack alive, but she’s also given a voice to a subject that is often treated as taboo in our culture. This week would have been when she and John Legend were supposed to welcome their new baby into the world, and the social media star has shared with followers what an emotional experience it’s been.

On Monday, the Cravings author spoke further about her feelings with Ellen DeGeneres. Asked about the heart wrenching photoshoot after losing the baby, she responded:

“Even looking at those pictures now, it seems like so long ago. And also, of course, you know, everything was such a blur. Even thinking back to it now, I am still in therapy about it and I’m still, you know, coming to terms with it in a way.”

“And I go through my closet, and I see — there are outfits, there are full, like, maternity clothes, and there are things that I bought, you know, for my eighth month and my ninth month… So it’s just hard because he would’ve been born this week, so you look at those things and you have these constant reminders of him.”

“But being Thai, and being raised in a house that was very open about loss, I think it was really helpful because I see it as, it can be a beautiful thing. And it was a really transformative thing for me, and in a way he really saved me, because, you know, I don’t think that I would’ve discovered therapy and then sobriety and then, you know, this path of kind of just really feeling good about myself and feeling like a new person.”

What an incredible perspective.

It’s amazing that Chrissy can be so positive just four short months later. But she acknowledged that the experience was difficult to process. She explained:

“Of course you don’t ever imagine it ever happening to you. I think that was what the crazy part for me is, I was like, ‘I hear these stories about other people …. This kind of stuff doesn’t happen to me.’ So when it does, you’re just so shocked.”

“But seeing the support from everybody, and the letters that flooded in, and the flowers… like the hundreds of bouquets. And then, you know, you think about all the people that go through it in silence and you get really sad for them. You know, ours was so public, so so many people were so supportive. But yeah, you really really gain this incredible amount of empathy. And I really, somehow, think I am a better person now. And it’s just… yeah, I just have the best support system ever.”

Related: Chrissy Reveals Why She Quit Drinking: Tired Of ‘Feeling Like S**t’

The daytime TV host thanked her for being “a voice for a lot of people.” Chrissy replied:

“You really don’t know the meaning of the word ‘unimaginable’ until something like that happens to you. … I just remember being so, like, perplexed. I was like, ‘I have everything, my goodness’ — and then afterwards, there’s such a spiral of things that you could have done differently, and you start to get really tough on yourself. But, I mean, what you learn through it about yourself is such a wild, incredible thing.”

“This week we’re thinking about him especially. … It’s been so beautiful to see my kids, the way they talk about him too. They’re so open and sweet. And when we go to the beach or something and they’ll say, ‘Is baby Jack with us right now? Do you think he’s up in the clouds?’ … It’s just so beautiful and so sweet. They’re such kind kids.”

Wow. Processing this kind of loss is difficult enough, but to do so on an international stage is truly unimaginable for us. Chrissy has been incredibly gracious and vulnerable through it all, and we have to commend her for that.

Ch-ch-check out her full appearance on The Ellen Degeneres Show (below):