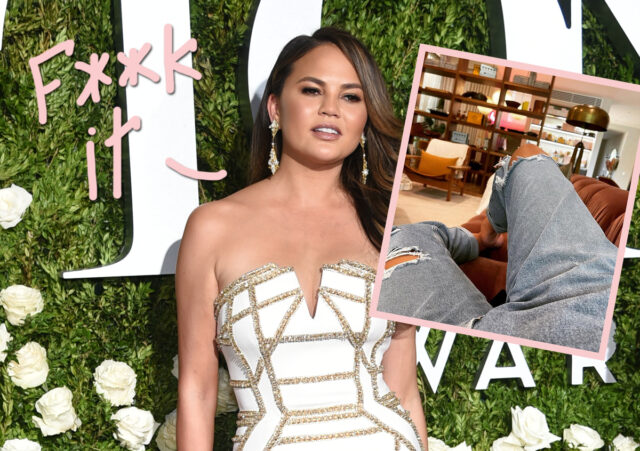 Chrissy Teigen is ready to make a return — because she needs it quite frankly!

The Cravings author took to Instagram on Wednesday afternoon to just blurt out everything she was feeling at the moment — you know, what her fans used to expect from her.

She wrote over a photo of her own legs as she lay on the couch:

“Iiiii don’t really know what to say here…just feels so weird to pretend nothing happened in this online world but feel like utter s**t in real life. Going outside sucks and doesn’t feel right, being at home alone with my mind makes my depressed head race. But I do know that however I’m handling this now isn’t the right answer.”

It sounds like she really has taken herself to task over this bullying controversy. For those who don’t know, Courtney Stodden accused the Lip Sync Battle co-host of sending them messages saying to commit suicide — leading to quite a few, cruel, old tweets to multiple young girls being uncovered.

Chrissy has publicly apologized to her fans twice (though it seems pretty shaky whether she’s apologized to the women who took the brunt of her Twitter trolling). Now, she’s ready to get back to her old position in the spotlight! She continued:

“I feel lost and need to find my place again, I need to snap out of this, I desperately wanna communicate with you guys instead of pretending everything is okay. I’m not used to any other way!!”

Any other way than the adoration of millions? We mean, you could just not be on social media, right..?

She then went on to talk about how hard it is not being able to be relatable to her fans as the victim of cancel culture, saying:

“Cancel club is a fascinating thing and I have learned a whollllle lot. Only a few understand it and it’s impossible to know til you’re in it. And it’s hard to talk about it in that sense because obviously you sound whiney when you’ve clearly done something wrong. It just sucks. There is no winning. But there never is here anyhow.”

It sounds like she’s just become so accustomed to everyone agreeing with her, she really can’t handle half the folks out here thinking she’s a jerk. We know, it’s awful — but it’s just the way it is on the internet. There are always going to be people just discovering the bad stuff, the old you, and making snap judgments — or even worse, hearing bad things about your past and thinking that means they get a free pass to project crap on you at every present turn.

There are always going to be those who get an impression of you solidified in their head and can never adjust it.

But there are plenty of fans who have already forgiven Chrissy, and it’s those people she so desperately needs to hear from:

“All I know is I love you guys, I miss you guys, and I just needed an honest moment with you because I’m just…tired of being sick with myself all day. I don’t even know if it’s good to say any of this because it’s gonna get brutally picked apart but I dunno. I can’t do this silent s**t anymore! If you or someone you know has also been cancelled please let me know if there is a cancel club reunion because I could use some time off my couch! Thank u and goodbye I love u”

A couple hours after posting, she revealed what her next step is going to be: cooking with her fans!

Related: Lindsay Lohan ‘Taking The High Road’ About Chrissy’s Suicide Tweet About Her

She hopped on IG Stories to tell everyone she would be going live to cook some fried chicken salad with fries:

“I wanted to tell you that I’m cooking tonight. It’s been too long. F**k it… If you wanna watch, watch!”

What do YOU think about Chrissy deciding to break herself out of social media jail and cook with fans?

Is she making too big a deal of everything? Certainly plenty of folks have gotten “canceled” and just kept on living their lives. Even ones whose lives are all about the online experience. Or is she not making enough of a big deal about what she did wrong? And focusing too much on how she feels as opposed to those who say she still hasn’t apologized to? OR, is there anyone who thinks she’s Goldilocksing it and getting it just right?

Let us know in the comments (below)!

The LOX and Dipset To Square Off For ‘Verzuz’ | Music

Annie Murphy Cried ’12 Times A Day’ During Lockdown – How She Overcame Tough...