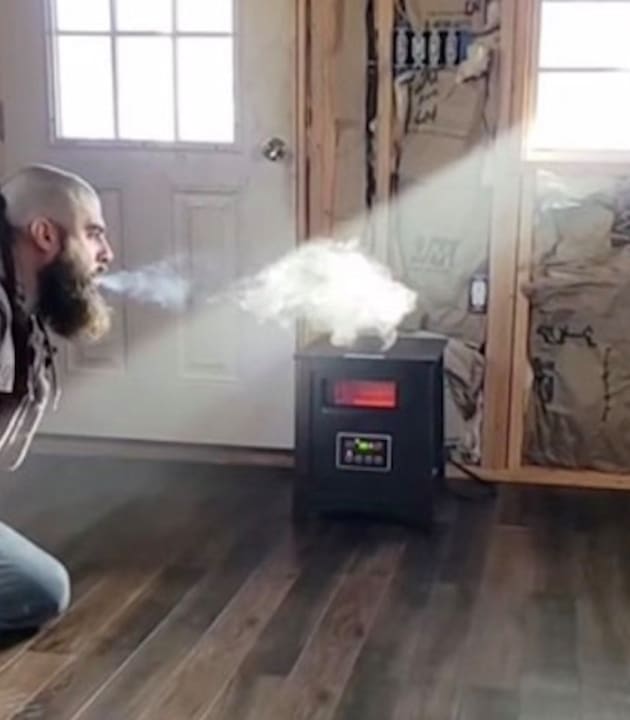 
He just told social media followers that his prayers for the perfect wife have been answered.


Becase Jenelle is loving? Sweet? Caring? A great role model for her kids?


Instead, according to this dog-murdering, Confederate Flag-loving, domestic abuser… he adores Evans and is so very grateful he found her because she smokes a ton of weed.


Earlier this week, Eason commented on a meme of Ned Flanders, Homer’s neighbor on The Simpsons.


“Lord please bring me a fine female who smokes as much as I do,” reads the meme.


We’re not entirely sure if God would be too excited to grant a prayer of this nature — but Eason believes He’s already done so.


“My prayers have been answered @j_evans1219,” wrote David in his reply.


Now, is it shocking that David and Jenelle love to smoke up?


This past July, Evans made it evident she was obsessed with marijuana.


She and her often-angry husband even made an an appearance at an Oregon marijuana dispensary called Burnt River Farms Cannabis Company, which was promoted online by the business.


For a period of time, it even looked like Jenelle would collaborate with this drug-based company.


Alas, not much came out of the partnership.


Evans, of course, also battled substance abuse on many occasions during her run as a cast member on Teen Mom 2.


“They filmed me on drugs,” Evans recently told followers, going through her VERY questionable behavior on camera over the years and adding:


“They filmed me, no lie, nodding out on-camera. They filmed me going to buy marijuana, and my director knew I had it in my car.”


So, no, Evans isn’t really being outed as a pothead by Eason here.


And yet: When you have young kids at home, and you’re trying to break back into reality television and/or make a name for yourself in the entertainment space again…


… perhaps you shouldn’t open discuss your drug use.


Just a few days ago, Jenelle was slammed for decorating a tray with weed stickers.


The mother of three was criticized as “tacky” and “immature” for using weed-shaped glitter and stickers.


Jenelle also showed folks how she was “repurposing an old metal tray” in a TikTok video, clearing no shame about her habit.


The MTV alum explained how her husband had sanded down the tray before she painted it green and covered it with stickers of a cat smoking, the outline of a marijuana leaf and Marilyn Monroe as well as glitter.


All this said, marijuana typically mellows a user out.


Alcohol, conversely, can lead to dangerous behavior, such as when Eason allegedly got drunk and broke Jenelle’s collarbone just over two years ago.


Evans, meanwhile, claimed late last year that she was done with hard drugs.


“I think growing up I wanted to experiment a lot, like everybody does. I did it a little bit too much, but I’m really happy that I overcame that.”