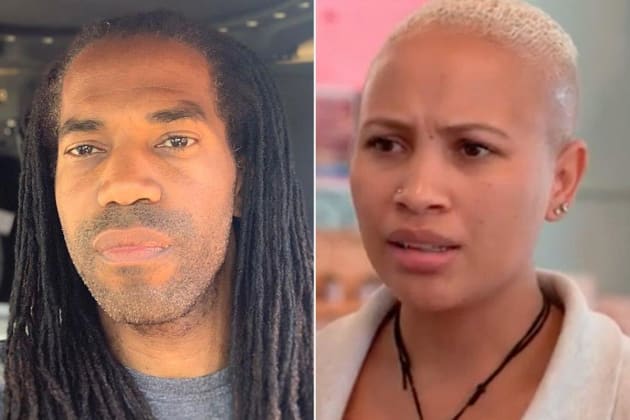 Dimitri Snowden is, unfortunately, back in the news.


The allegedly violent and manipulative reality star played a major role on Seeking Sister Wife Season 3, as he and his spiritual wife, Ashley, sought a long-term partner.


At one point, they brought in Christeline Petersen, with Dimitri and this mother of two getting legally married in July of 2020.


It didn’t take long for the relationship to fall apart, however.


Petersen filed for a restraining order in March 2021, claiming in these legal documents that Snowdon assaulted her on numerous occasions.


In her filing, Christeline alleged that, back in January of last year, she was woken by Snowden “slamming my head into the headboard of the bed and he was yelling at me.”


She went on to say that Dimitri also shoved her skull against the headboard several times, which prompted Peterson to file a police report.


Petersen told authorities that Dimitri was abusive during intercourse, writing in her official complaint “he choked me during sex, even though I told him not to,” and adding:


“The more I struggled the more he enjoyed it.”


Just awful stuff all around.


After Peterson went public with these claims, other women also came out with their own abuse allegations against Snowden.


Another previous partner, Vanessa Cobbs, for example, seemingly referred to Snowdown on social media, labeling Dimitri as a “narcissistic predator” and an “abuser.”


Then there was Ariadne Joseph, who came into Dimitri and Ashley’s world in 2019… and who later told blogger John Yates that Dimitri pushed her on to a table full of guns after she found text messages from another woman on his phone.


“There was no way that I could get free because he had the back of my neck,” Joseph added.


“You know, when you’re in a situation where you’re married, or with someone, and you both have had consensual sex, it’s hard to reconcile in your mind that this person has violated you, has taken something from you without permission …


“So I knew that it was wrong, but I didn’t even know how I would go and report that as being, you know, the ‘r’ word.”


Yes, she’s talking here about getting raped by Snowden.


So there’s your troubling refresher, for those unfamiliar with Dimitri Snowden.


Peterson, a native of South Africa, eventually worked up the courage to leave this awful human being — she thanked fans for their support last June, but didn’t reveal her whereabouts at the time.


According to Snowden, she never responded to his petition for divorce, either.


In February, therefore, Dimitri urged a Los Angeles judge to grant his request to legally end this failed union.


According to court papers obtained by The Sun, Dimitri claimed there are no assets or debts to be determined by the court. He also requested neither party receive spousal support.


In March 2022, Christeline finally responded to the petition, asking for a divorce herself and citing “irreconcilable differences” as the basis for her desired split.


At this time, the case remains ongoing.


Last year, Christeline also filed a restraining order against Ashley, who has also separate from Dimitri.


“She shoved me and tried to prevent me from leaving the home my husband and I shared with her. She also threw a bottle at me.


“She was verbally abusive and called me names. My children are scared of her due to her yelling at them and the violence in the home between her and my husband, and me and her.”


The Snowdens appeared on all three seasons of Seeking Sister Wife that have aired so far.


New episodes premiere on June 6 — but, thankfully, they will NOT include the Snowdens.


Scroll down for the official network synopsis…


The new season will document the lives of five polygamous families as they navigate the challenges of actively searching for and courting potential new sister wives.


Returning couple, Dannielle and Garrick Merrifield are still waiting for Roberta to join them in Colorado while Sidian and Tosha Jones are long-distance dating potential Filipino sister wife Arielle.


Newcomers, Steve and Brenda Foley have decided to begin their polygamist journey again and this time with a much younger potential sister wife.


Lastly, the Epps family, Marcus, Taryn and India are a plural family actively seeking another wife to join their group but they have to overcome some growing pains.

Dancing with the Stars: Canceled by ABC! Sort Of!

Zendaya looks like a – Image 1 from Iconic!: Zendaya Models A Futuristic Schiaparelli...