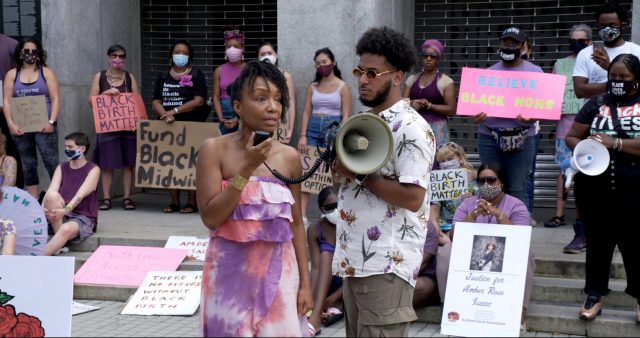 The Winners Circle section, a collection of major awards winners, includes Paula Eiselt and Tonya Lewis Lee’s “Aftershock,” a look inside the U.S. maternal health crisis and the role that racism plays in it, and Tamana Ayazi and Marcel Mettelsiefen’s “In Her Hands,” a tribute to one of Afghanistan’s youngest female mayors.

Women-directed and co-directed titles account for three of eleven films in U.S. Competition, or 27 percent of the slate. Among the films set to screen is Christine Yoo’s “26.2 to Life,” a look inside a distance running club in the San Quentin State Prison. Nine of 12 of films in the International Competition are helmed or co-helmed by women, or 75 percent of the lineup. The program includes Karen Cho’s “Big Fight in Little China Town,” an exploration of how Chinatowns in New York, Montreal, and Vancouver are resisting harmful city redevelopment plans.

Check out the complete lineup for DOC NYC on the fest’s website. All of the women-directed and co-directed films screening in U.S. Competition and International Competition can be found below.

DEAR THIRTEEN (World Premiere)
Director: Alexis Neophytides
Producers: Alexis Neophytides, Trina Rodriguez, Alex Murawski
In their own words, this tender, illuminating look into the lives of nine 13-year-olds from around the world reveals who they really are.

FATI’S CHOICE (North American Premiere)
Director: Fatimah Dadzie
Producers: Hamid Yakub, Tiny Mungwe
​​After surviving a perilous migration to Europe, a Ghanaian mother returns to her village to reunite with her children, meeting disdain from her family and neighbors.

THE HAMLET SYNDROME (North American Premiere)
Directors: Elwira Niewiera, Piotr Rosolowski
Producers: Magdalena Kaminksa, Agata Szymanska
A group of young eastern Ukrainian actors create a unique stage production of Hamlet, through which they process their own personal experiences of the war with Russia.

THE HERMIT OF TREIG (US Premiere)
Director: Lizzie MackEnzie
Producer: Naomi Spiro
A spirited elderly hermit and a young filmmaker forge a 10-year friendship, as the hermit navigates his declining health and questions his ability to continue living in the wilderness.

HOW TO SAVE A DEAD FRIEND (US Premiere)
Director: Marusya Syroechkovskaya
Producers: Ksenia Gapchenko, Mario Adamson
A grunge love story between a suicidal 16-year-old Russian girl and a fellow lost soul, filmed over 12 years under the shadow of Putin’s regime.

Meri Brown: I Love My Life! Seriously! For Real!