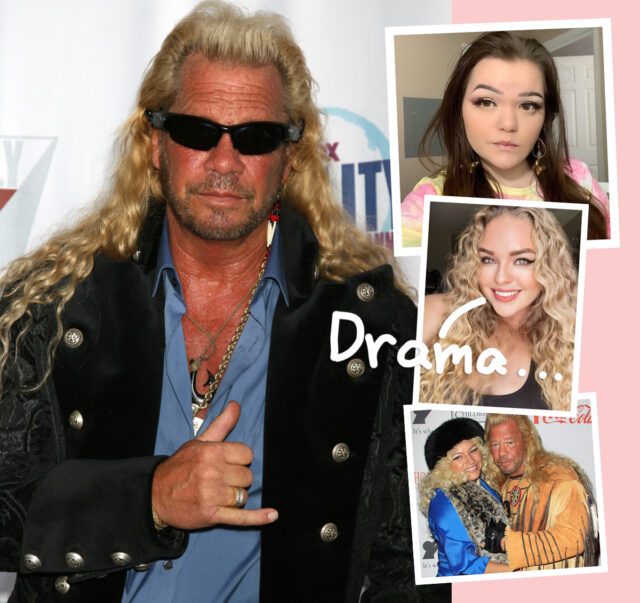 Dog the Bounty Hunter is all set to get remarried next week, but there’s some inner-family drama going down right now that is threatening to cast a cloud over what should otherwise be a meaningful moment in the reality TV star’s life.

As fans will no doubt remember, Dog has long planned to get hitched to Francie Frane, who he has been dating after his longtime beloved first wife Beth Chapman (pictured in the bottom right, inset, with Dog) died of throat cancer back in 2019. It’s a heartbreaking story for Dog, real name Duane Chapman, who struggled publicly after her untimely and very sudden death and only over time with lots of healing found love again.

Like we said, it should be a beautiful source of happiness for the Chapman family. Only there’s one thing potentially marring the entire ceremony: two of his daughters, Cecily Chapman (middle right, above) and Bonnie Chapman (top right, above), have told TMZ that they are not on the guest list and have specifically not been invited to celebrate in person on the big day.

According to the outlet, the two girls have been barred from Dog’s September 2 wedding ceremony to Francie — and the girls believe the reasoning behind the ban all comes down to “a personal issue” with the father of 12. (FYI, Cecily is technically Dog’s step-daughter, brought in by Beth from a previous relationship, while Bonnie is Dog’s biological daughter.)

Cecily shared with the media outlet her belief that she and Bonnie may “remind [Dog] a little bit too much” of their late mom, and thus having them around on a day like the wedding could very, very painful. Both women were clear about one thing, at least: neither one has a beef with Dog’s new bride-to-be, Francie, and each are supportive of him getting married again if that’s what he wants.

Icing out the pair is doubly interesting when you consider the fact that Garry Chapman — like Bonnie, Dog’s biological child — has been invited to celebrate the nuptials. The girls half-wonder whether that just comes down to how “Dog tends to favor his sons,” in addition to the whole Beth reminder thing. Hmmm…

As for Dog and Francie, they did release a brief statement about the matter to TMZ, saying (below):

“We love Cecily and Bonnie very much, as we do all of our family. We pray for their health and happiness every day. Beyond this statement, we wish to keep any family issues private.”

So is that them confirming this is a known family issue, then?

Whatever the reasoning, it’s a sad story. You’d think a guy would want his whole family there for his wedding! Then again, remembering the pain Dog went through when Beth died several years ago, maybe there’s just some part of him that can’t bare to bring that back to the surface again.

Family issues are never easy, that’s for sure. What do U make of all this, Perezcious readers? Sound off with your thoughts and reactions to Dog’s wedding drama down in the comments (below)…

Christine Brown Has a Blast on Thanksgiving, Very Clearly Doesn’t Miss Kody At All