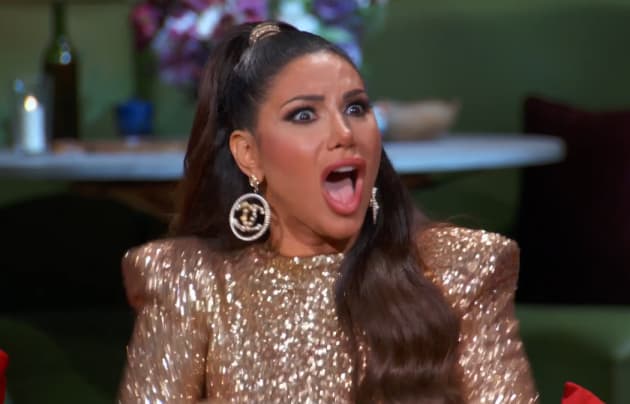 Judging from the The Real Housewives of New Jersey Season 12 Reunion trailer alone, things are beyond tense for this cast.


Accusations, screaming, and obscenities are normal. Threats to quit on the spot are not.


Dolores Catania took things up a notch as she put Jennifer Aydin on blast.


She bypassed the regular insults and went for the jugular, calling her the C-word with her whole chest.


The Season 12 RHONJ Reunion special does not begin airing until May 3, but the trailer gave us plenty to digest.


“I felt that Dolores had a hidden agenda,” Jennifer is shown telling Andy Cohen in the trailer.


Mind you, she’s seated right next to Dolores … which is incredibly awkward.


Normally, we’d love to say that maybe this is out of context, but there’s no question at whom Dolores’ words are aimed.


“Don’t call me a f–king c–t,” Jennifer screams back at her.


“Here we go, here we go,” Melissa Gorga remarks in reaction to the conflict.


Obviously, we are denied the full context and aftermath of this.


The trailer’s job is to tease, not to give away everything that goes down on that messy stage.


However, we can certainly discuss the friction between these two.


For most of Season 12, Jennifer and Dolores seemed to be doing just fine in terms of friendship and getting along.


However, Jennifer characterized Dolores as being a “jerk” to her as the show was airing … a claim that changed everything.


“She claims to defend me — and she does in real life, she really does defend me,” Jennifer said during an interview in February.


Jennifer then continued: “And sometimes is a jerk to me on the show.’”


“But now I’m starting to realize she doesn’t like me,” Jennifer shared.


“And,” she speculated, perhaps Dolores “just appeases me for the show.”


Jennifer expressed: “So I don’t know where we stand.”


Jennifer noted: “I just know some of the things I saw [this season] were really hurtful.”


She remained optimistic, at least back in February.


“Hopefully,” Jennifer said, “we can try and work it out at the reunion.”


Weeks later, Dolores offered a public reply … and was clearly less than pleased.


She declared that she does not “give a f–king motherf–k,” which is an amazing unit of measure.


“We haven’t [spoken],” she said in a March interview. “She’ll speak to me at the reunion.”


“Save it for the camera, fine,” Dolors expressed, as if directing her words at Jennifer personally.


“But have your peace with me and say it to my face before,” she continued.


According to some, Jennifer may have just been repeating whatever observation Teresa had made.


“But I dont really give a f–king motherf–k,” Dolores emphasized, “so that’s really too bad, Jennifer.”


“I’ve stuck up for you every episode, even when you were not defendable,” Dolores recalled.


As for why Jennifer made those remarks, Dolores speculated: “If it’s not for attention, [why] do you have to wait to tell me at the reunion?”


Dolores then warned: “Know that I will be a different person to you now for the rest of your life.”

The Real Housewives of New York City Season 14: Brand New Cast on the...