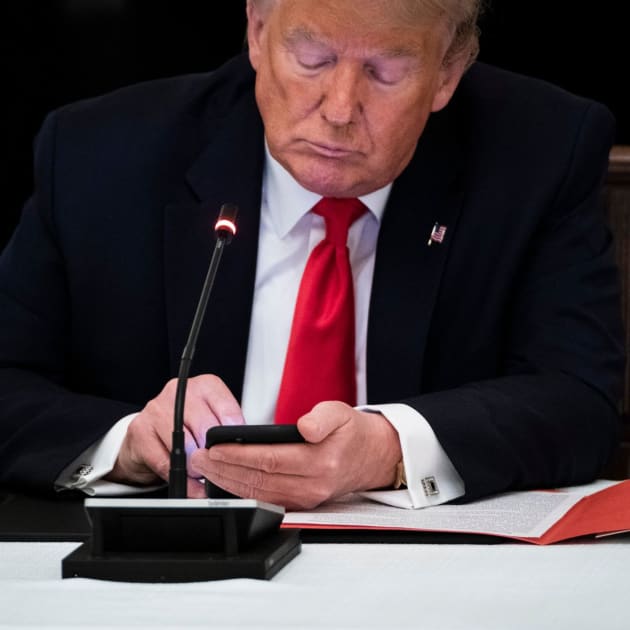 Donald Trump doesn’t care that close to 400,000 Americans are dead from the coronavirus.


Nor does it bother him that five people were killed and a government building placed on lockdown because a slew of his supporters committed an act of treason last Wednesday.


However, the President is very angry that he’s been kicked off Twitter.


On Friday evening, this social media platform finally realized that the leader of the free world was actively encouraging his voters to rise up against their elected leaders.


“After close review of recent Tweets from the [“realDonaldTrump”] account and the context around them — specifically how they are being received and interpreted on and off Twitter —  we have permanently suspended the account due to the risk of further incitement of violence.”


The company noted that it has a “public interest framework” in place so its users can “hear from elected officials and world leaders directly.”


However, Trump pushed the limits of this framework.


“We made it clear going back years that these accounts are not above our rules entirely and cannot use Twitter to incite violence, among other things,” the company wrote.


“We will continue to be transparent around our policies and their enforcement.”


The President is “ballistic,” a senior administration official has told Politico, adding that Trump was “scrambling to figure out what his options are.”


Based on a statement made on his behalf after Twitter made its fateful call, the wheels are already in motion.


Said Trump in this statement:


“We have been negotiating with various other sites, and will have a big announcement soon, while we also look at the possibilities of building out our own platform in the near future.”


As you can see above, Trump also claimed Twitter has “coordinate wiith the Radical Left” to keep him silent, alleging that the platform is “not about FREE SPEECH” and concluding:


“They are all about promoting a Radical Left platform where some of the most vicious people in the world are allowed to speak freely.


All talk about Trump’s First Amendment rights being violated is, of course, absurd and ignorant.


The government is not suppressing his speech. He’s not being threatened with prosecution for expressing his thoughts.


… and then he broke those rules when he incited a seditious riot.


Experts believe Trump will try to keep his MAGA movement going via Parler, a two-year-old magnet for the far right that claims more than 12 million users — and where his sons Eric and Don Jr. are already active.


Google and Amazon, however, have taken down the Parler apps from their platforms because it’s basically just a cesspoll in which White Supremicists can congregate and plot to overthrow the government.


We shudder to think what will happen when Trump gets impeached again.


Things may very well get a lot worse before, God willing, they get better.

Megan Thee Stallion Docuseries on the Way from Nneka Onuorah