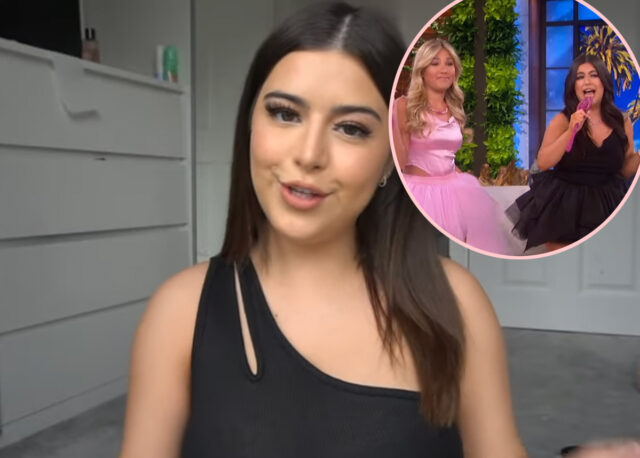 Sophia Grace Brownlee wants to make it clear to everyone that she’s never got work done on her face!

The 19-year-old, who rose to fame at a young age alongside her cousin Rosie McClelland due to her viral appearances on The Ellen DeGeneres Show, shared a new video on her YouTube channel addressing some questions or speculations her fans had about her over the years. One of the biggest rumors her followers wanted Sophia to set the record straight on? Whether or not she has ever gone under the knife or used injectables. She revealed her answer in the clip, saying:

Related: Mama June Is Not On Board With Honey Boo Boo’s Weight Loss Procedure Plan!

The internet personality explained that the most common misconception about her appearance she sees on social media is that she has changed her lips – but she insists she’s never had them done:

“The main comment that people think the main surgery people think I’ve had is my lips done. I mean, I really don’t think my lips look that big. Maybe I haven’t underlined them as much as I usually do today. But I’ve never had lip fillers. I wouldn’t be interested in getting lip fillers.”

While Sophia noted she could change her mind in the future about getting plastic surgery, for right now, she does not want it:

“I can never say that I wouldn’t get surgery in the future because you never know. For now, I don’t really want any surgery. I don’t feel like I need it. But obviously, some people do, and that’s completely fine.”

As for why she thinks her fans believe she’s had cosmetic surgery? The singer confessed that it all comes down to the way she does her makeup:

“If I do, you know, have lips that look quite plump and big sometimes, it’s literally just makeup. Makeup is very powerful and obviously I look very different without makeup to what I do with it, which most people do. And yeah so that’s the reason why maybe people think it is because I am quite good at makeup and I’m quite good at making my face look like maybe I have had surgery, even though I haven’t.”

So there you have it, folks! You can ch-ch-check out her entire video (below):