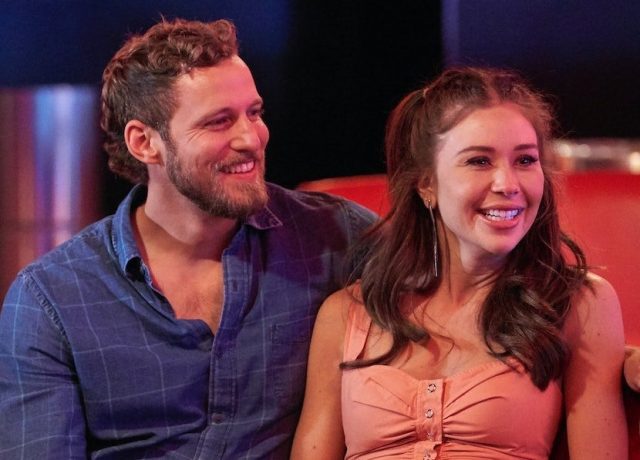 According to some recent Bachelorette spoilers we’ve read, Erich Schwer has a major reason to be happy at the moment:

However, while viewers are about to reportedly see Erich get down on one knee and propose to this Bachelorette co-lead, the 29-year old took a moment this week to figuratively get down on his knees for a very different reason.

A few days ago, high school photos of Erich started to circulate on social media.

In addition to a traditional yearbook snapshot, the viral Reddit post also depicted an image of Erich wearing blackface and an afro wig — and it quickly garnered backlash.

On Thursday afternoon, to his credit, Erich issued a statement on Instagram in response to the criticism.

He didn’t make any excuses, either.

“I wholeheartedly apologize for the insensitive photo of me in Blackface from my high school yearbook that has been circulating,” the New Jersey native wrote.

“What I thought at the time was a representation of my love for Jimi Hendrix, was nothing but ignorance.

“I was naïve to the hurtful implications of my actions to the Black community and those closest to me, and will forever regret my offensive and damaging behavior.

“I am deeply ashamed by my actions and understand that my apology is only the first step in taking accountability.”

Erich is Gabby’s only remaining suitor after Johnny DePhillipo and Jason Alabaster were eliminated during their respective overnight dates because they weren’t ready to propose.

Earlier this summer, he lost his father just days after the latter appeared on Gabby’s hometown date episode.

It’s worth noting here that Nate is Black.

“Appreciate you taking ownership bro, I can’t absolve you of this but I can attest to the man I’ve met and you have been nothing less than someone who I’d consider a friend,” Nate wrote.

“You aren’t the first person I’ve befriended with a similar past and the difference is not having an attitude of willful ignorance.

“Your school accepting this behavior and posting this to a year book tells me that no peers or faculty around you spoke out to guide you away from this issue. Kids do fall victim to their environments time and time again.

“Continue to grow and learn from your past and I’ll continue to support you and provide advice should you need/ask for it.”

“Takes a man to talk about his mistakes. guys who have met you know what kind of person you’ve been.”

Gabby has not yet commented on the scandal.