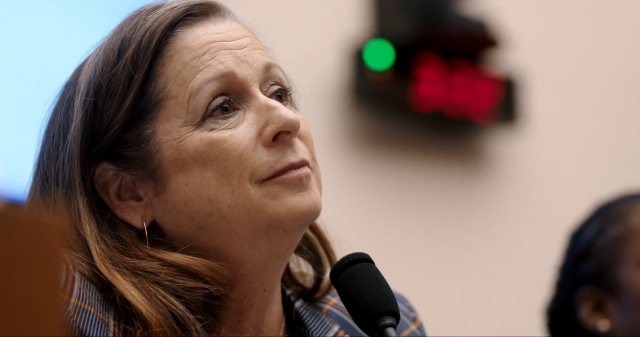 Abigail Disney’s latest pulls back the curtain on the happiest place on Earth. “The American Dream and Other Fairy Tales” sees the activist, philanthropist, and filmmaker following up her directorial debut, “The Armor of Light,” with a look inside her family business, the global media empire, Disney. In our exclusive clip of the Sundance doc, helmed by Disney and Kathleen Hughes, the former brings issues of inequality to Capitol Hill, going before the House Financial Services Committee.

“Today I hope to raise some simple questions about CEO compensation. Does a CEO’s pay have any relationship to what his hotel maids and janitors get?” she asks. “Do the people who spend a lifetime at the lowest end of the wage spectrum deserve a living wage? This is a moral issue,” she emphasizes. “The burden is not just on Disney, and Disney is a long way from being the worst offender.”

Disney goes on to explain that Disney could raise the salaries of all of its workers — some of whom are using food stamps, sleeping in their cars, and going without medical care because they can’t afford it  — to a living wage. “People made this problem, and by people it can be fixed,” Disney explains.

“The film uses the Walt Disney Company as a lens through which to see the dramatic changes in the norms and laws around the American business culture in the last 50 years, changes that have left us with historic income inequality and a deep debt to the American worker,” Disney told us. She wanted to make a case for the “total moral overhaul of the American system of business.”

“The American Dream and Other Fairy Tales” is now in theaters and will be available on VOD September 23.

Danielle Ruhl and Nick Thompson: It’s Over for the Love Is Blind Stars!