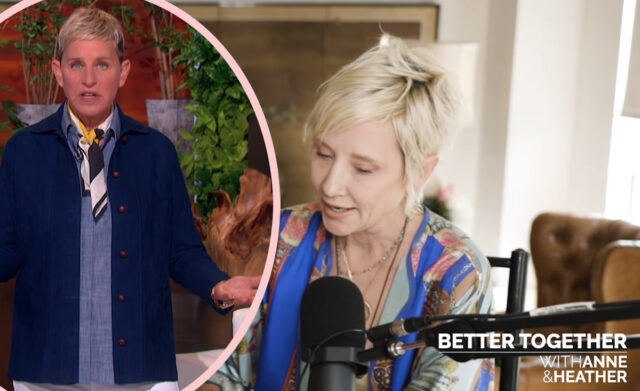 This is AH-Mazing, y’all!

In her bombshell Better Together podcast this week, Anne Heche finally unloaded years of frustration with her ex Ellen DeGeneres. She spoke about how she was silenced by the daytime diva, some of the reasons they broke up, and how relieved she was that the talk show she was banned from was finally over.

But she’s not done spilling the tea yet! In fact, the John Q actress agreed to answer all our burning questions in an exclusive Q&A, along with her podcast co-host, Heather Duffy — but she made sure to note she was “not here to do any Ellen bashing.” Fair enough, gurl! Let’s dive in.

When asked if she ever tried to reach out and make peace with the embattled talkshow host, Heche said:

“Every day of my life with her was reaching out to her to make peace. I think it was a very difficult thing for her to trust that I was a woman who could fall in love with a woman without being gay, and I think that was a lot to process. So I tried to make that process as simple as possible by quitting Hollywood, moving to Ojai, growing gardens, starting to write and direct — which I did with her and Sharon Stone: a movie, of all things, called Conception — and nothing would satisfy her soul.”

Wow. Quitting acting, moving… Sounds like Anne really put her all — and then some — into this relationship. More on that in a bit…

Next, we discussed the toxic workplace environment accusations that came from former and current staffers on The Ellen DeGeneres Show. Anne said she hadn’t spoke to Ellen “in years” when that broke, but she was happy those who needed to “speak their truth” about the TV star were doing so. When asked if the stories about the comedienne being “emotionally abusive” to her staff rang true to her, the 52-year-old said:

“‘Emotionally abusive’ is a container for our actions that we’ve not healed, and unfortunately the abusive environment was something that I understood.”

A very classy way of saying YES, Ellen truly can be not-so-nice behind the scenes!

Circling back to their relationship, we asked Anne when she knew she needed to break things off with the Finding Dory star — and her answer contained a rather disconcerting tidbit. She began:

“I wanted desperately to have that relationship be the love of my life. That was my Cinderella story. What happened was that I was, through the circumstances, shut out from things that I cared about and, in order to make her feel that she was being loved, I would erase those things from my path — such as acting — and replace them with things I thought would give her a foundation. As we got further and further away from me being able to be in public the way that would please, I began getting further and further away from my friends and my friendships, and one of the things that concerned me very much was that I was beginning to feel shut off and shut down and shut away.”

But it wasn’t until Ellen made THIS shocking demand that Anne decided to walk out for good. She recalled:

“When I told Ellen that I needed to have friends, she said she did not want a girlfriend that needed that. And that is the day I left.”

Whoa. She didn’t want a girlfriend who needed friends? Everyone needs friends! WTF?!

Despite the way their relationship ended, and how the comedian apparently spent the next two decades essentially derailing Anne’s career by blocking her from ever appearing on Ellen, the actress doesn’t wish she never supported her ex. In fact, she feels quite the opposite because of how important that moment was:

“I wish I supported her bigger, stronger, better, greater. I was given the opportunity to speak on the steps in Washington at the gay march in Washington and stand up for what I believe is our right to love without gender. And this is something that I wished that I could continue to say for the last 20 years by her side, on her arm, and I realized that she did not believe the same.”

Obviously, things didn’t work out the way Anne hoped they would, but we’re glad she’s finally speaking her truth. Ch-ch-check out the clip (below) for more.

Can Republicans And Democrats Be Friends? | Perez Hilton