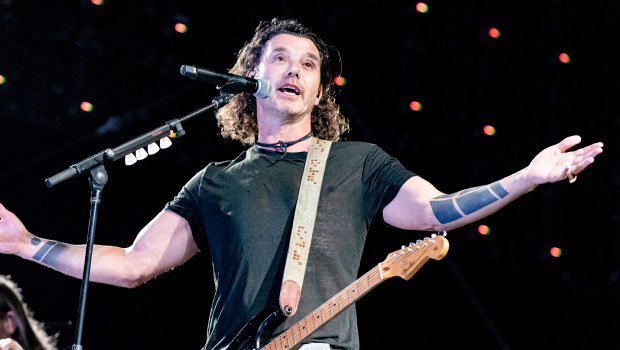 It’s a fun family night for Gavin Rossdale‘s bunch! The 36-year-old rocker shared a glimpse of his home life on Instagram on July 19 by sharing a sweet snapshot of him at dinner with his four kids, daughter Daisy Lowe, 33, and sons Kingston, 16, Zuma, 13, and Apollo, 8. “Welcome to my world .the best few weeks at home with my better versions of me,” he began in the caption of the post. “oh the joy they bring .and yes there’s chewy bottom left.and our super hero apollo. My love is indeed ocean sized.”

Gavin smiled a proud smile as he sat at a dinner table with his adorable brood around him. Kingston stood to his left and had his right arm lovingly wrapped around his dad, while Zuma stood behind him. Daisy sat to the right of her dad and donned a red dress and had her arm around Apollo, who sat next to her. The men in the photo dressed casually in an array of black and white tees and tank tops.

A picture of all of Gavin’s children together is a rare one. Daisy was a result of a one-night stand between the Bush frontman and Pearl Lowe, 51, in 1989. Gavin was not made aware of his daughter until he took a paternity test in 2004, two years after he married singer Gwen Stefani, 52. In March, Daisy admitted she and Gavin experienced a “rocky start” to their relationship while appearing on the That Gaby Roslin Podcast. However, once she found out that Gavin was her father, and not her godfather, which she was originally told, she said it all made sense. “The funny thing was, the moment that I found out that he could be my dad, I was like, ‘Oh this makes perfect sense.’ We think in the same way and we have so many quite frightening similarities,” she recalled.

Gavin shares his boys with Gwen, who they welcomed into the world through the course of their relationship, which ended in 2015. According to a source close to the No Doubt singer, the former spouses only communicate when it’s about their children, and that’s it. “Gavin and Gwen don’t have a relationship except with the kids. They do not communicate often and it’s as minimal as possible,” they revealed to HollywoodLife EXCLUSIVELY “They have lived very separate lives for a while now and don’t get along.”

And while a family photo is rare, Gavin has taken to his Instagram before to show off his kids. In May, he hopped online to wish his eldest son a happy 16th birthday. “happy birthday sweet 16 kingston you changed my life forever and i will never be the same again,” he wrote in the heartfelt post, which featured an image of his lookalike son with his arms behind his head. “you are a force of light . you have bloomed like an ancient spirit. i am thrilled for what is to come. i watch with great pride and excitement . with so much tragedy in the news it makes me even more grateful for you and the inspiration you bring to those who love you.”

Chelsea Handler’s Boyfriend: Everything To Know About Her Romances With Jo Koy, 50 Cent & More

Plus, in January, he shared an equally sentimental message about his eldest child, Daisy, for her special day. “happy birthday @daisylowe what a joy you are -and we’re so happy to have you here with us on your birth day – the most generous sweet gorgeous thoughtful kind and empathetic daughter and sister .we love you so much and we are in awe of you,” he wrote alongside a snapshot of her smiling with a birthday sundae.

And on New Year’s Day, he took to his ‘gram to wish followers a happy new year with a photo of him with all three of his boys. “HAPPY NEW YEAR -it’s hard to reflect on last year without a bit of confusion-like what was that ?-it’s great we get to start again,” he said. “here’s hoping it’s as fulfilling as possible -and we get some reprise from the madness -these holiday times can be challenging to so many people -life is not easy for anyone – may this year be the opportunity and good fortune you deserve -empathy and kindness make the best gasoline – with love from mine to yours.”