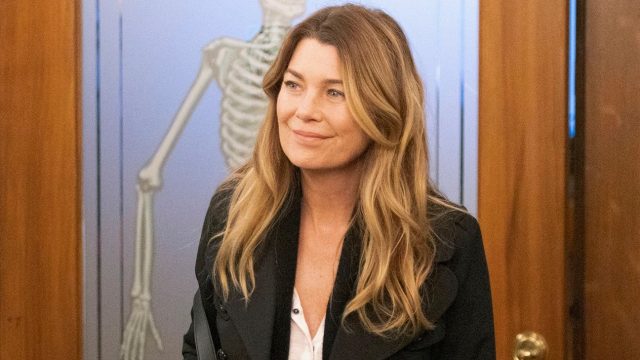 The fall finale of Grey’s Anatomy aired on Thursday night.

The series will not return with new episodes until February 23, which at least gives fans plenty of time to prepare for what they know is coming… and yet may find very difficult to accept:

The departure of Ellen Pompeo.

We learned back in August that Pompeo would only return for Season 19 in the beloved role of Meredith for a total of eight episodes.

The actress had been candid over recent years that she was pretty much done with acting — and that she really didn’t know where else the long-running show could even go.

Heck, Pompeo once admitted that she was anxious for Grey’s Anatomy to end.

That day may still be far in the future, but the November 10 installment of the medical drama did at least make it clear just how and why Meredith’s time in Seattle is coming to an end.

The surgeon sent a short and sweet email to the staff of Grey Sloan Memorial Hospital, officially announcing that she was moving to Boston because she had accepted a position with the Catherine Fox Foundation to research Alzheimer’s disease.

On a professional level, this left Richard wondering how the decision will affect the new intern class.

On a personal level, this left Nick reeling.

“And I get it. I do. I get it, your family needs you. But it sucks. It sucks. And I’m being supportive because there is no other answer.”

Later, Maggie went over to Meredith’s house (formerly her mom’s house, of course) to help her pack her belongings.

But then, after Meredith left to perform a procedure, lightning struck a tree right near the house.

The mother of three raced home, discovered her children were safe and was then handed the framed Post-It of her original vows with Derek from way back in the day.

“Winston found this earlier. It fell when the lightning hit. It was all I managed to take,” Maggie said.

Looking ahead, meanwhile, ABC aired a trailer for the winter premiere of the show… making it clear that the February 23 episode will focus on Meredith’s stunning departure.

In the promo, a glowing Meredith walks the halls of Grey Sloan on her final day as she prepares to leave Seattle behind.

“It’s been a lot,” Meredith says, as the footage flashes back to the devastating fire that tore through the home she once shared with her late husband, Derek. “A fire. Moving.”

Naturally, however, Meredith then gets a send-off worthy of her legacy, despite her labeling of the hospital party as “ridiculous.”

However, Owen, Teddy, Webber, Maggie and others want their friend to have her moment to shine.

“For god’s sakes Grey, will you just let us toast you?” Owen says, offering her a glass of champagne.

As stated previously, Pompeo appears in eight episodes this season, and the winter premiere will mark her seventh episode..

This means the actress and executive producer will return to Grey’s at least one more time before season 19 is over.

Trailer Watch: An Afghan Politician Fights for Women’s Education Rights in “In Her Hands”

Janelle Brown: Did Christine FORCE Her to Leave Kody?!