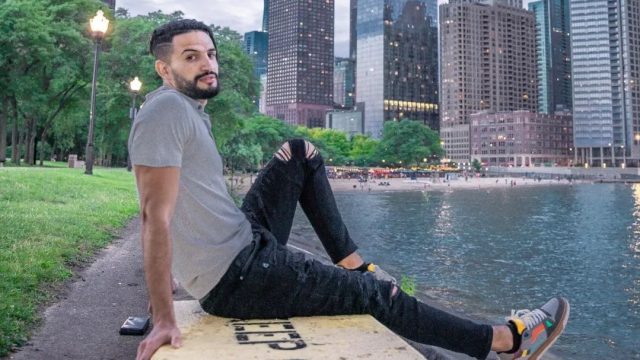 As 90 Day Fiance: Before The 90 Days viewers are aware, the two married and welcomed a baby before their ugly breakup.

Now, the former couple (who almost certainly filmed for Happily Ever After?) are living apart and fighting it out in court.

Some have asked why Hamza is out partying in another city in another state if he’s so broken up about things. Now, he’s responding.

Hamza took to his Instagram Story this week to explain why he was seemingly having such a good time in Chicago.

“I get many people with the wrong idea,” he began.

Hamza noted that some feel “that I left my daughter to have fun in Chicago.”

“Even if you see me smiling on here,” Hamza explained.

He clarified that “behind that smile in a lot of pain.”

Hamza then expressed that “I am really broken inside.”

“I won’t be OK until I see my daughter again,” Hamza vowed.

He wrote: “I am trying to get through each day.”

Hamza concluded his post with: “Some of you don’t really know my pain.”

He also included a pair of broken hearted emojis, conveying his sadness.

The context, of course, is that Hamza is returning to Michigan from Chicago.

Hamza has been living in Chicago, Illinois since April. It is now September.

From early spring until late summer, he has apparently been apart from not only his ex, but their baby girl.

Clearly, some 90 Day Fiance fans and followers took this as a lack of interest.

To be fair, we don’t know a lot of details about Hamza’s trip to Chicago. Or about the breakup. Or the custody situation.

We can all understand that it is normal to smile and do normal things, even when you are grieving a loved one.

If Hamza had only posted tearful Instagram updates for the past five months, it would have been a performance.

Some viewers are of course surprised that Hamza and Memphis had such an ugly breakup, and so quickly.

Yes, they had their problems during the season. But they were so happy and so together at the Tell All.

In fact, during that special, Memphis seemed to have more problems with production than she did with her husband.

Hamza’s sister, Rawia, has been the primary “source” of information about this ugly breakup.

It sounds like Memphis’ coparenting relationship with her ex continued to bother Hamza.

We know that they come from different cultures, but … it’s hard to see a marriage ending over that.

Rawia has also implied that Memphis is in violation of the custody agreement or even a court order.

Of course, Rawia’s knowledge of what is going on likely comes from Hamza.

It is possible that she does not know the whole story. We certainly do not.

Many believe that Kimberly and Usman joined this season at the last minute, despite filming for another season of Before The 90 Days.

We are incredibly nosy and would love to know what led to all of this. The breakup. The move to Chicago. And why Memphis and Hamza filmed for weeks but the footage will never air.