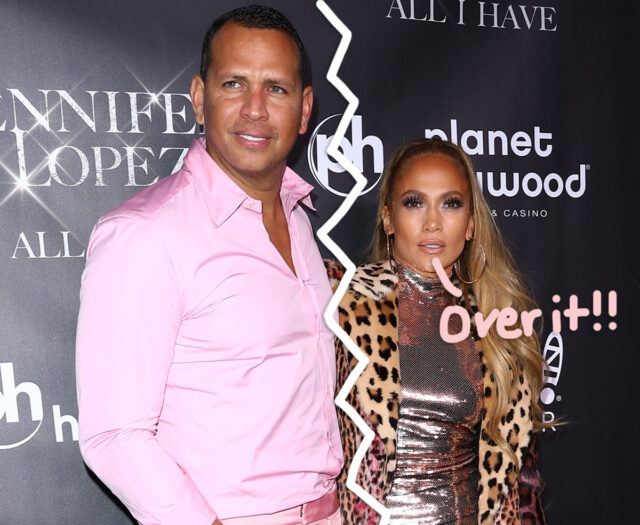 Since the announcement, there has been a ton of speculation about what led Jennifer Lopez to call it quits with Alex Rodriguez after spending weeks trying to mend their relationship. Well, it turns out it all came down to a lack of trust.

On Thursday, a source told E! News that the couple had actually ended things privately a few days ago, and Lopez has been “feeling at peace” with her decision. Then, a second source revealed her inability to rely on Rodriguez became fatal to their relationship. YIKES!

“Once her trust is broken, there’s no turning around. She feels good about her decision because she knows A-Rod will still be in her life, just in a different capacity.”

Related: Jennifer Lopez Has NOT Returned That EXPENSIVE Engagement Ring To A-Rod!

We’re guessing as minimal as possible on her part! In their breakup announcement, Lopez and Rodriguez said they plan to stay friends despite what may or may not have happened.

“We have realized we are better as friends and look forward to remaining so. We will continue to work together and support each other on our shared businesses and projects. We wish the best for each other and one another’s children. Out of respect for them, the only other comment we have to say is thank you to everyone who has sent kind words and support.”

A typical breakup message, if we do say so ourselves.

In case you didn’t know, the 45-year-old athlete previously made headlines for allegedly cheating on Lopez with Southern Charm’s Madison LeCroy, who suggested the pair had been chatting over DM in February. However, an insider shot down the infidelity rumors to Entertainment Tonight, saying that Lopez had not bothered by them at the time.

“[They] are so connected both romantically as a couple and as a family with their kids and these rumors wouldn’t break that. Jennifer isn’t bothered and doesn’t care about the Alex and Madison rumors. She thinks it’s outside noise and trusts Alex. She’s so in love with him.”

But when initial split reports broke last month, a source later revealed to Page Six that Lopez had been affected and “embarrassed” by the allegations.

So if it has been over between them for a while, why exactly did J.Lo take so long to call the engagement off? According to Us Weekly, a source confessed it was due to their children’s bond with one another. As you may know, the singer shares twins Emme and Max with ex-husband Marc Anthony, while the ex-Yankees player shares daughters Natasha and Ella with ex-wife Cynthia Scurtis. The confidant said:

“A-Rod’s girls and J. Lo’s kids are really close, so the reason why they stayed together for as long as they did was to make their kids happy,” the insider said on Thursday, April 15. “They still have love for each other that I think will never go away.”

The source further added Jennifer and Alex pushed off the official announcement to the public so they wouldn’t ruin the kids’ holiday plans.

“They wanted to still get together for Easter as a family so their kids could still enjoy the holiday.”

Even more so, it seemed like the exes wanted to allow the family some quality time together before they started to see less and less of each other.

“Jennifer and A-Rod had been in couples counseling for a while and they truly just grew apart. [They] will still remain in communication, but they both have a lot going on in their careers that they most likely will not be seeing each other or having play dates as much anymore. They still have their mansion, they still have deals they were working on together. Everything is in the process of being sorted out.”

If your head isn’t spinning yet, just wait as there still could be a smidgen of hope for the twosome. While this looks like a definitive breakup on Lopez’s side, Rodriguez still hasn’t given up on winning his ex back. A third source told E! News that:

“He is respecting her wishes right now but has high hopes they will get back together. He’s doing anything in his power to make J.Lo happy.”

Judging from his Instagram Story shrine to their four-year relationship, Rodriguez may need a little time to let this go!

Why do U think Alex and Jennifer called it quits, Perezcious readers? Let us know in the comments (below)!

Under the Radar: “Women of My Billion” Examines India’s Long-Standing Gender-Based Social Injustices