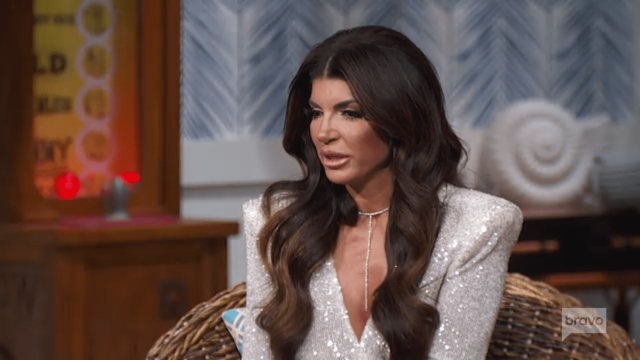 If she had her way, the world would view Teresa Giudice as very nice and drama-free. As a victim of users, even.

That is not how The Real Housewives of New Jersey fans see her.

But Teresa has seemed very happy in her normal life, and in many ways annoyed with some things related to RHONJ.

Yes, she just filmed her wedding and more. But is Teresa really planning to leave the franchise now that she got her happily ever after?

Teresa Guidice has heard the rumors that she is leaving the show.

She spoke to Metro.co.uk about her plans for The Real Housewives of New Jersey.

“I’m going to be on it until they want me off,” she vowed.

Teresa then emphasized: “I’m always going to be on.”

She confirmed that she will appear on Season 13, and also confirmed the 4-episode Bravo special about her August 6 wedding.

The nuptials were, Teresa assured, “beautiful.” As will be the special.

“The day I got married was beautiful. Breathtaking, magical, dreamy, like a fairytale,” she raved.

Teresa then affirmed that her husband, Luis, is “the love of my life.”

In another recent interview, Teresa promised a lot of what her new PodcastOne show, Namaste B$tches, has to offer.

“It’s very sad. … People thought a certain way about me,” she then lamented.

“And,” Teresa optimistically speculated about future listeners, “then they’re gonna be like, ‘Wow, we were so wrong.’”

“I think … when you watch this season [you’ll see that] I kept my mouth shut a lot over 10 years,” she claimed.

Is that something that Teresa has a reputation for doing? Would be news to us.

She strongly hinted that tension and conflict with her brother, Joe Gorga, and sister-in-law, Melissa Gorga, are a factor.

“Don’t forget, my parents were around back then,” she recalled, referring to past seasons.

So,” Teresa then claimed, “I tried to keep the peace for a long time.”

“And … you know, somebody could only take so much for so long,” Teresa characterized.

“It’s not happening anymore,” she then stated. But what exactly is she talking about?

Teresa isn’t saying exactly, but she did tease: “I think everybody’s … gonna be blown away.”

Naturally, Teresa expects to feel “sad” as she relives these painful family squabbles.

But she is determined to share it all — even the bitterest conflicts.

“I’m totally fine [with it]. Totally fine,” Teresa emphasized. Is that the truth? Who knows.

“I got taken advantage of for so long, for over 10 years,” Teresa wants people to believe.

“I got taken advantage of,” she claimed.

According to Teresa, this all came to a stop when “finally, [husband Luis Ruelas] came into my life.”

“And,” Teresa went on to characterize, “it was like, ‘That’s not happening anymore.’”

She then stated her intentions for all that she plans to share: “I think [everyone is] going to see the truth.”

Her dream is for people to tune in, listen to what she has to say, and come around to her side “of everything that’s been really happening.”