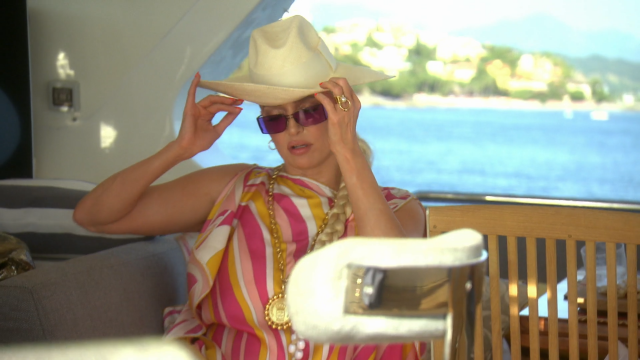 There is a lot to say about this season of The Real Housewives of Beverly Hills.

Erika Jayne has acted as an antagonist in multiple ways.

And some RHOBH viewers feel that, despite that, it’s been uneventful.

One of those viewers is Oscar-winning celebrity superfan Jennifer Lawrence.

Jennifer Lawrence is, like so many of us, always happy to discuss the Real Housewives.

Unlike most of us, she sometimes gets to share that enthusiasm with Andy Cohen and various news outlets.

This time, she discussed RHOBH alongside co-star Brian Tyree Henry … who shared less, for one good reason.

He explained that he does not want “Erika coming for” him in retaliation for his statements.

But J-Law told Variety that her simplest takeaway was that this has been a “boring” season.

That said, she also affirmed her goal of seeing it through to the end.

“Not a great season,” she appraised, “but I’ll finish it.”

She shared that “Brian [Tyree Henry] and I have quite Dubai, and we’re done with Dubai.”

Lawrence explained: “My biggest problem with this season [is] that it’s just been boring.”

Frankly, many viewers also feel “done” with the Dubai spinoff. For a number of reasons, not everyone was even willing to give it a chance.

But she had more to say about the Beverly Hills side of things.

“And I think that Erika is evil,” Jennifer Lawrence declared.

“I would go as far as to say she needs a publicist ASAP,” J-Law commented.

Most people would say “she needs a publicist” at some point before reaching the “evil” stage, right?

But she is hardly the first to note how Erika has destroyed years of goodwill practically overnight.

Contrary to what Erika things, it has not simply been framing of her estranged husband’s alleged crimes.

Many of us are extremely skeptical of the claims, thus far seemingly unsubstantiated, that Erika was a collaborator.

Every piece of evidence (and, frankly, common sense) seems to indicate that Erika didn’t question where her husband’s fortune originated.

Like the rest of us, Jennifer Lawrence has watched as Erika’s friends and castmates tried and failed to talk her down.

She could at least make a show of sympathy for Tom Girardi’s alleged victims.

Yes, of course she feels sorry for herself right now — and rightly so. But that does not look good to viewers right now.

“Lisa Rinna tried to look out for her and tried to like — she didn’t do the Dorinda thing,” Lawrence characterized.

She recalled: “Remember when they were in Colombia and Dorinda’s [wearing], like, f–king Joker makeup.”

“And,” J-Law explained, “Carole Radziwill was just talking to her and leaving her out there.”

“Oh no, I’m not talking about this,” she suddenly proclaimed.

Many of us have found ourselves over-discussing our favorite media and then abruptly cut off what we’re saying.

In fact, many of us have done this with the Real Housewives. Jennifer Lawrence is no different. Just, you know, rich and famous.