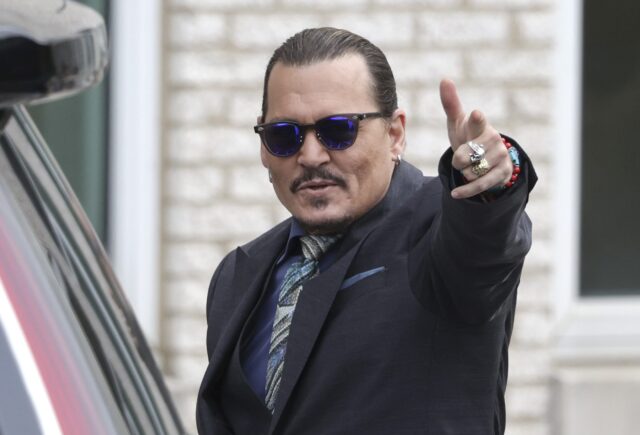 It’s been almost two months since Johnny Depp won his defamation case against Amber Heard, and it seems the 59-year-old is still riding high on his victory.

Johnny has been taking the stage to shred alongside the living legend on every stop of Beck’s tour.

The band was in Italy over the weekend to perform at the Umbria Jazz Festival, and some pics of Depp are attracting a lot of attention from fans.

As TMZ, first reported Depp was spotted in the presence of a redheaded female companion backstage.

The two were photographed holding hands, and well — we don’t wanna say for sure that they hooked up.

But typically when famous rock star types are spotted holding hands with much-younger redheads backstage, the two of them don’t end the night with a rousing game of Scrabble.

Or if they do, said Scrabble follows a vigorous intercourse session.

Anyway, some outlets have gone so far as to call the mystery woman Depp’s new girlfriend.

And while that’s certainly a possibility, there’s no solid evidence to that effect as of yet.

Depp is usually a pretty private person — or at least as private as one can be as a famous movie star who was recently embroiled in one of the most high-profile celebrity court cases in recent history.

But Johnny has been enjoying the adulation of his adoring public more than usual lately.

Depp has even joined Instagram to better connect with the fans who offered him so much support during his six-week defamation trial.

“a little lull in Stockholm… between shows JD X,” Depp captioned the photo above, which was posted on his Instagram page earlier this month.

There’s been a good deal of debate over the extent to which Johnny’s online popularity influenced the outcome of the trial.

Heard’s attorneys have argued that the jury was influenced by all the support that Depp seemed to be receiving online, to say nothing of all the memes and brutal tweets bashing Heard.

Heard has begun the process of appealing the verdict, but thus far, she has not met with much success.

Already, a judge has rejected Heard’s first request for a new trial.

Amber’s legal team alleged that one of the seven jurors in her first trial was not who he claimed to be and had responded to a summons that was intended for his father (who shares the same name).

The judge noted that there was no “Jr.” or “II” or any other indication of which member of the household the summons was meant for

So we guess it’s back to the drawing board for Team Amber.

It seems that Johnny has no intention of slowing down his victory parade, but his war with Heard is likely far from over.

Janelle Brown’s Aunt Says for Sure: My Niece is Done with Kody!

Why Matthew Perry Spent $350K on a Trip to Switzerland