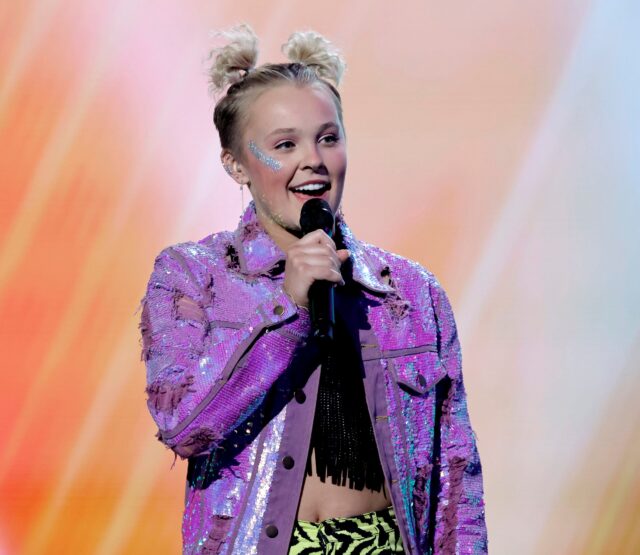 JoJo Siwa rose to stardom as a contestant on Dance Moms.

Which now seems more relevant than ever before.

Because she just danced, and stomped, all over the reputation of Candace Cameron Bure.

The 19-year old uploaded a TikTok video on Sunday, July 24, in which she sought to expose a number of celebrities for a number of different reasons.

In the footage, Siwa is wearing a light blue bikini and hanging out by the pool and she quickly shows the camera a photo of different stars while responding to various prompts.

When it came time to reveal the “rudest celebrity I’ve met,” Siwa flashed a photo on her phone of Cameron Bure in a short-sleeve maroon turtleneck while filming the sitcom Fuller House.

Seemingly in response to this slight, the veteran actress jumped on social media on Monday to share a cryptic bible verse.

“Trust in the Lord forever, for the Lord God is an everlasting rock,” Bure, posted via Instagram Story on July 25, labeling the quote from Isaiah 26:4 in the Bible.

For the record, Bure wasn’t the only person Siwa called out in her TikTok post.

The Dancing with the Stars alum also called out Nickelodeon for “[doing] me dirty” alongside a photo of SpongeBob Squarepants.

The singer and young businesswoman has been open about her tumultuous relationship with the children’s network, alleging in September 2021 that she has been barred from performing songs from her movie The J Team while out on tour.

“I go out on tour in January,” Siwa wrote via Twitter at the time.

“My movie musical was just released (with 6 new original songs) … Nickelodeon told me today that I’m not allowed to perform/add any of the songs from the film into my show.

“These are MY songs. My writing. Does this seem fair???”

Seven months later, Siwa claimed that the network snubbed her by not inviting her to the 2022 Nickelodeon Kids Choice Awards… despite her being nominated for the event.

“A lot of you have been asking me why I’m not at the Nickelodeon Kids’ Choice Awards tonight,” she said during an Instagram video in April.

“And the answer is very simple: I wasn’t invited. I’m not sure why. But I didn’t get an invite.”

As for who Siwa does seem to support?

… Miley Cyrus as the “nicest” celebrity she has met…

… And Elton John as the “coolest.”

Kartik Aaryan & Varun Dhawan groove together to Bom Diggy Diggy at a party...

Rangoli Chandel takes a dig at Taapsee Pannu, calls her a ‘creepy fan’ of...

Kardashians REACT to Headlines Getting ‘So Out of Hand’