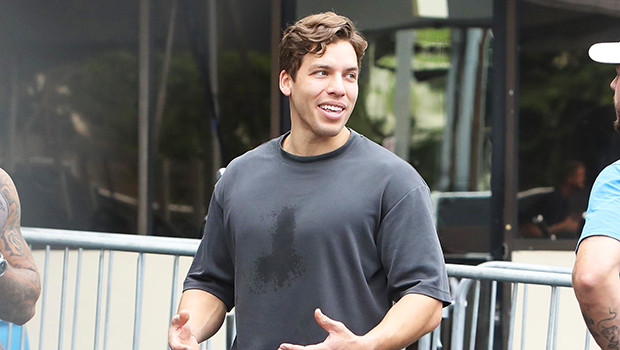 Nothing like a father-son gym session to get you pumped for the dance floor. Joseph Baena met up with his dad, Arnold Schwarzenegger, at the historic Gold’s Gym in Venice Beach, California, on Tuesday (Oct. 11). Arnold, 75, dressed in a dark blue shirt and shorts, while Joseph, 25, kept it casual with an oversized gray shirt and black workout shorts. Together, Arnold and Joseph hit the machines to get in their reps, with the Hercules In New York star proving he still has the iron will that made him a bodybuilding and action movie icon.

Arnold’s lookalike son focused on his chest for this workout, hitting the cable crossover machine to do a few chest fly exercises. At one point, Joseph bared his teeth and looked just like Arnold did back when the Austrian native was starting to break into the movie business with Conan The Barbarian, Commando, and Predator. During the exercise session, Arnold and Joseph chatted with their fellow fitness buffs.

This meeting comes days after Joseph paid homage to his father on Dancing With The Stars. The Oct. 10 episode was “Disney+ Night,” and the synergy saw Joseph and his partner, Daniella Karagach, dance to “A Star Is Born” from Disney’s Hercules. Arnold’s acting debut was 1970’s Hercules In New York, and Joseph spoke about this tribute after the episode. “I love my father,” he said. “He’s the smartest, best man I can think of, so to be compared to him, to be in the same character Hercules, he played Hercules in New York, it’s amazing. It’s awesome. And who doesn’t want to be like their father, right?”

Joseph gave fans a glimpse of the costume on his Instagram, posing along – while showing off his ripped body. “I had a little too much fun in tonight’s costume,” he captioned the video, which drew a lot of comparisons to Arnold’s performance of Conan the Barbarian in the movie of the same name.

In the March 2022 issue of Men’s Health, Joseph spoke about the moment the world learned that Arnold was his father. Schwarzenegger was married to Maria Shriver when he had an affair with their housekeeper, Mildred Patricia Baena, resulting in Joseph’s conception. Mildred and Arnold kept Joseph’s paternity a secret for over a decade, but the news eventually got out. And everyone wanted the details.

“I remember the day very vividly,” remembered Joseph. “I was in the eighth grade. Fifth or sixth period. And I get called out of class to leave. And my mom’s there, and she’s like, ‘We gotta go—everyone is finding out about you and who your father is.’” Despite the media storm, Joseph eventually developed a strong bond with his father, which continues to this day.