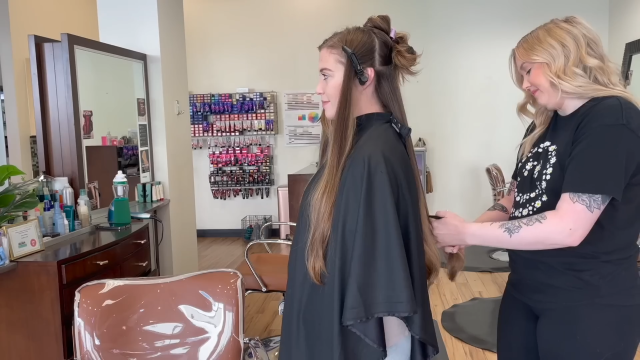 While Austin Forsyth and Joy-Anna Duggar are expecting their third child, Joy opted for a change.

She went out and got herself a new haircut. This wasn’t a simple trim, but a new hairstyle.

When you’re part of an oppressive cult that labels you as your husband’s property, your personal style can be a big deal.

And many of Joy’s fans winced in sympathy for her over Austin’s reaction to the new ‘do.

It began with her husband, Austin Forsyth, by her side.

The two simply announced their vlogging plans. But then things picked up a little once the pregnant Duggar gal was alone.

“I am going to get my hair cut,” Joy-Anna announced to her fans and followers in the YouTube video.

This haircut, she divulged, would be a bit of a departure from the look that she has “always” cultivated.

Conspicuously long hair can be a great look. It happens to be extremely common among women in fundamentalist cults.

“But I thought for the winter and this pregnancy,” Joy explained with a nervous edge, “I thought it would be fun to change it up.”

Joy shared that Austin was actually out of town. So this would be a surprise.

Clearly, she felt both nervous and excited — nervouscited, if you will — to show her new hairstyle to her husband.

First, of course, she had to go to the salon. The first major step was the actual haircut.

You can see the debris for Joy-Anna’s massive haircut right there on the floor of the salon.

While Joy lost at least a bird’s nest — or the stuffing of a throw pillow — in hair volume, this was only the beginning.

Up next came the highlights. Joy wasn’t going fully blonde like a certain sister of hers, but some blonde dye entered the fray.

As many of us are aware, highlighting hair involves covering parts of the hair while leaving other strands exposed.

There are a number of art forms — such as a wax resist in watercolors — that employ a similar philosophy.

This time, the medium is hair dye and the canvass is Joy-Anna’s hair.

But this isn’t nearly as quick and easy as a haircut or as many dye jobs.

Highlights have to be selectively placed and done carefully. Otherwise, it comes out looking off — or you accidentally dye way too much.

It looks like Joy’s hairstylist was careful and thorough. Ready to see the results?

Joy declared that she “loved” her new hairstyle.

“It’s not, like, super short, but for me, it’s really short,” she gushed to the camera. That is fair. Many of us have very different ideas of “short” and “long” hair.

Meanwhile, she was aching to show her new ‘do to Austin.

To debut her new look to her husband, Joy-Anna ended up staying up until the devil’s own hours — 1 AM.

Austin returned after his six-day trip to Colorado. She answered the door with her hair up, to preserve the surprise.

Then, she let it down, capturing his reaction on video.

When prompted for a reaction, Austin’s reply was a little lackluster.

“It’s a little short,” he told his wife. It is unclear if he was aware of the camera at all.

Joy nudged him for more. Austin replied with a sigh and declared: “I don’t hate it.”

Austin eventually worked his way up to telling his pregnant wife that her hair is “cute.”

But, he emphasized, he wanted it longer.

“You dirty dog,” he teased her. That’s an odd use of that phrase, but they do not live in the same world that the rest of us do.

Weirdly, he also shared that his father had spoiled the surprise — revealing the haircut, if not the details, with a secretive salon photo. Weird.

Fans flooded the comments with sympathy towards Joy. Austin (and his dad) had really not given her what she wanted.

That said, Joy is the one who edited and posted this video. Apparently it wasn’t too bad for her to share with the public.