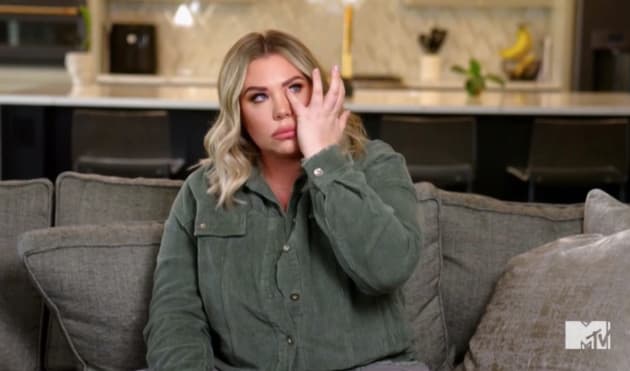 Back in October of 2020, Kailyn Lowry was arrested for assaulting Chris Lopez.


The indicent has been making headlines again in recent months thanks to a lawsuit that Lowry filed against Briana DeJesus, alleging that her costar committed defamation by talking about the arrest on social media.


The judge disagreed, and Lowry’s suit was thrown out of court.


DeJesus celebrated her victory with an “anti-Kail party” and countless boastful social media posts, but as Lowry reminded viewers during last night’s Teen Mom 2 reunion show, her tempestuous relationship with Chris was no laughing matter.


At one point during her segment, Kail was asked by Dr. Drew Pinsky if there was a particular reason that she decided to begin therapy.


Kail revealed that she experienced profound trauma after being victimized by a violent attacker.


“Was it like a domestic abuse situation, was it just a random act of violence, was it somebody you knew?” Pinsky asked.


There was a moment of stunned silence as Dr. Drew and co-host Nessa Diab processed the news.


“It actually hurts my heart to hear this. We’ve been with you a long time. I am so sorry. I wish I’d known,” Pinsky said before applauding Kail’s bravery in telling her tale.


“No one would know this if you didn’t share it. I’m so heartbroken for you, I’m really sorry.”


“I just haven’t figured out the right time or way to tell my whole story,” Lowry explained.


“I don’t think it’s something that people openly talk about.”


Lowry said the decision was especially difficult for her, as she felt like a “hypocrite” due to an incident in which she pushed her ex Javi Marroquin in 2012.


“No – they are two separate phenomenon,” Dr. Drew promptly corrected.


Before Chris joined the show via video link, Kail commented on allegations one final time, saying:


“There are faults on both sides. Whatever has been said about me from her can literally be said about them,” Lopez argued in his own defenese.


“There’s been abuse on both sides.”


“Did you ever threaten her with violence or injure Kail?” Dr. Drew asked.


“Injure? No. She’s making it seem like I literally beat her… I never beat her,” replied Chris.


However, Lopez did admit to threatening his ex and said that he wasn’t “innocent” in their relationship.


Kail concluded her segment by saying what might be her final goodbye to the show that made her famous.


Rumors about Lowry quitting Teen Mom 2 have been circulating for months now, and last night, Kail seemed to confirm that she will not be returning for another season.


“I’m not gonna say goodbye to her today,” he said.


Obviously, only time will tell, but it seems to us that Kail is well and truly done with the entire Teen Mom franchise.


And the flak she’s taken from the public and her costars over the past few years — all while attempting to heal from a profoundly traumatic incident — was likely a major factor in that decision.