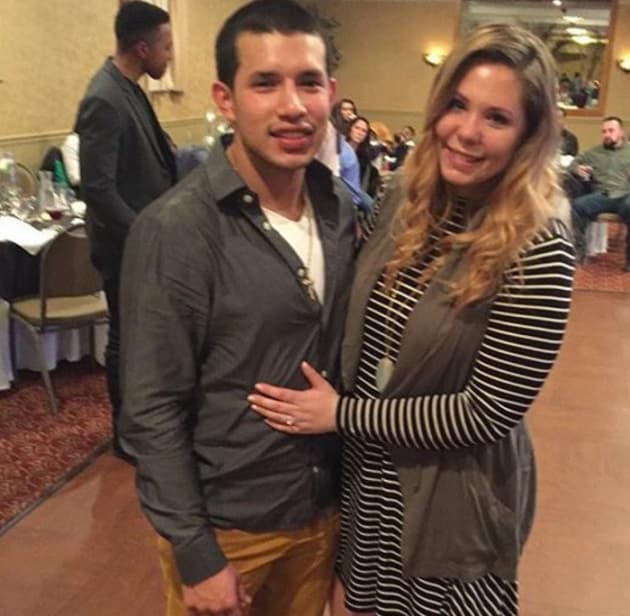 
The fixation appears to have started with the incident that occurred back in October, when Kailyn revealed to the world that Javi had tried to have sex with her in the parking lot of a gas station.


That classy encounter led to Javi being dumped by Lauren Comeau, but it did not result in Kail and Javi rekindling their romance.


However, Javi has remained at the forefront of Lowry’s mind, and it seems that she doesn’t care who knows it.


Take, for example, the latest episode of Baby Mamas, No Drama, the podcast that Kail hosts along with Vee Torres, the wife of her first baby daddy, Jo Rivera.


One might think that if one of Kail’s baby daddies were to come up for discussion it would be Jo, or perhaps Chris Lopez, who seems to create the most drama in her life.


But no, it’s Javi who dominates the conversation, and this week, the hosts had an “aura-reader” on the show to help them understand the mysteries of Marroquin.


Interestingly, Kail kicked things off by complimenting her ex-husband.


“Javi is a great dad. I’ve never had anything negative to say about him in that way,” she told her audience.


Sadly, the love fest was short-lived, as Kail soon turned her attention to pointing out Javi’s many flaws.


“I think the hard thing for me with him is that he goes with whatever hat he’s wearing that day,” she said, using a somewhat clumsy metaphor to explain that Javi is a bit too changeable.


“It’s whatever he is around,” Kailyn added.


“It’s very frustrating to deal with him in that way. When outside factors aren’t into play, we’re best f–king friends.”


If it sounds like Kail is once again calling Javi an irresponsible loser — well, she is.


And at that point in the conversation, she was just getting warmed up.


Wait until you hear what she has to say about inconsistency and inability to tell the truth.


Lowry started by stating that Javi “can’t keep his word.”


And then she really went off:


“I hope whatever relationship he moves forward in; they understand each other better and work through that,”


Folks, this is some top-notch concern-trolling.


Kail is pretending that she’s worried about Javi’s inability to tell the truth, and she says she’s afraid it might cause issues in his future relationships.


This is coming from a woman who (allegedly) had an affair with Javi throughout the entirety of his most recent relationship.


To be fair, it seems she eventually got sick of his dishonesty, as she decided to call out his cheating on national TV.


Probably not the way his fiancee wanted to hear the news, but hey, the important thing is that Kail put a stop to Javi’s lying!


Yes, if mental gymnastics were an Olympic sport, Kail would definitely win the gold.