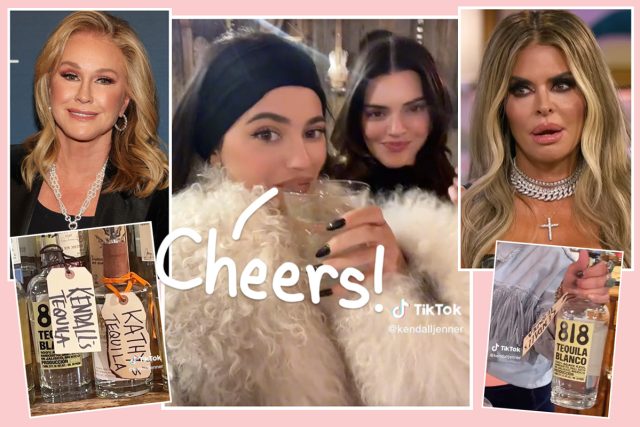 Gotta give Kendall Jenner and her little sister Kylie Jenner some credit on this one. They can definitely laugh at themselves when they need to!

The duo popped up in Aspen, Colorado over the weekend and delivered a great meta-reference to a recent contentious episode of the Real Housewives of Beverly Hills. And naturally, they managed to cross-promote Kendall’s 818 Tequila brand while they were doing it! These women are nothing if not powerful girlbosses! LOLz!

Related: Could Kendall And Harry Styles Ever Rekindle Their Former Romance?!

So, first, a look back. As Perezcious readers will recall, during season 12 of RHOBH, the cast took a trip to Aspen. One night, they ended up at a bar in the Colorado mountain town. Once they sat down, they found that the local watering hole had 818 Tequila on hand. And they also had Casa Del Sol Tequila behind the bar. That’s Eva Longoria‘s tequila brand, of which RHOBH cast member Kathy Hilton is a major investor.

Kathy wanted to support her product. But Lisa Rinna wanted to back Kendall! The Days Of Our Lives alum famously said this during the episode, which aired back in September:

“I just want to try it because it’s my friend Kendall Jenner’s tequila. I just haven’t tried it.”

But Kathy was NOT happy with that!!

After hearing Rinna’s comment, the 63-year-old fashion designer said she “couldn’t f**king believe what she just said” and then stormed out of the bar. The moment created tension across the rest of the RHOBH season, even bringing some friction to Hilton’s relationship with sister Kyle Richards.

So when Kendall and Kylie visited Aspen this weekend, they wanted to make sure to get their own dig in at the September situation. And that they did!

The duo took to TikTok to post a HIGHlarious video from the very same bar. In it, the 27-year-old tequila brand owner and her 25-year-old makeup mogul sis recreated the famous Bravo scene. They showed how the bar has a tag on one bottle with the label “Kendall’s Tequila,” and on the other the marker notes “Kathy’s Tequila.”

They even captioned their vid in a perfectly appropriate way:

“all love for kathy and lisa”

As you can see (below), the pair took sips from Kenny’s drink of choice while the RHOBH audio played on in the background:

all love for kathy and lisa

Rinna picked up on the joke immediately and re-posted it to her own social media. Fellow RHOBH star Erika Jayne also weighed in, writing on Lisa’s video that the “entire trip was insanity.” No public response from Kathy yet, sadly. But still. That was pretty f**king funny!

Also, it seems like Kendall is definitely laughing at herself and her life in the public eye more often in recent months. We certainly love to see that!!