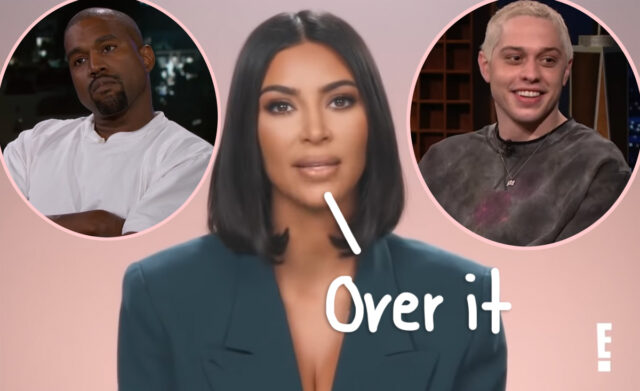 Kim Kardashian is – unsurprisingly — not happy with Kanye West.

According to People, the 41-year-old Keeping Up With the Kardashians alum is “furious” with Ye over his recent music video for Eazy that featured a disturbing depiction of her boyfriend, Pete Davidson. In the video that dropped earlier this week, scenes show a claymation rendering of the Saturday Night Live Star being kidnapped, tied up, and buried alive by the 44-year-old rapper. Of course, this is all paired with the notorious lyrics that called out Davidson:

“God saved me from the crash, just so I can beat Pete Davidson’s ass.”

It was unsettling, to say the least, and it turns out Kimmy Kakes thought so as well. The source spilled to People on Friday:

“She thinks it’s way too violent and is upset. She’s really upset with Kanye that he’d do this. She’s completely over all of this and she wants it to stop.”

Previously, Kanye expressed his frustration on social media about their 8-year-old daughter North West being on TikTok “against [his] will.” After his latest antics, the insider noted that the SKIMS founder “doesn’t understand how Kanye can get upset about North being on TikTok yet he can put out these kinds of videos. It makes no sense to her.” They continued:

“Kim’s No. 1 concern right now is making sure that her children are protected from the situation because everything plays out in the public eye and that’s very difficult when there are children involved. She is very angry about the violence and she just feels that it’s inappropriate and wrong.”

The Stem Player producer has targeted Davidson on social media for months now, including making threats against the comedian and bragging about driving him off Instagram. He even asked fans to harass the King of Staten Island star in public last month, writing:

“IF YOU SEE SKETE IN REAL LIFE SCREAM AT YHE LOOSER AT THE TOP OF YOUR LUNGS AND SAY KIMYE FOREVER.”

It had become so bad that Kim not only reached out to her estranged husband asking him to put an end to his threats, but she also begged the courts for their divorce, saying the social media posts have “created emotional distress” for her:

“I very much desire to be divorced. I have asked Kanye to keep our divorce private, but he has not done so. Kanye has been putting a lot of misinformation regarding our private family matters and co-parenting on social media which has created emotional distress. I believe that the court terminating our marital status will help Kanye to accept that our marital relationship is over and to move forward on a better path which will assist us in peacefully co-parenting our children.”

Thankfully, the judge granted her request! But now that she’s  legally single, we will have to see if Kanye continues his horrifying antics towards Pete — but something tells us that he most likely won’t anytime soon.

[Image via Keeping Up With The Kardashians/YouTube, Jimmy Kimmel Live/YouTube, The Tonight Show Starring Jimmy Fallon/YouTube]

Kourtney Kardashian is Pissed About The Kardashians Edit: I Don’t Care About Scott!