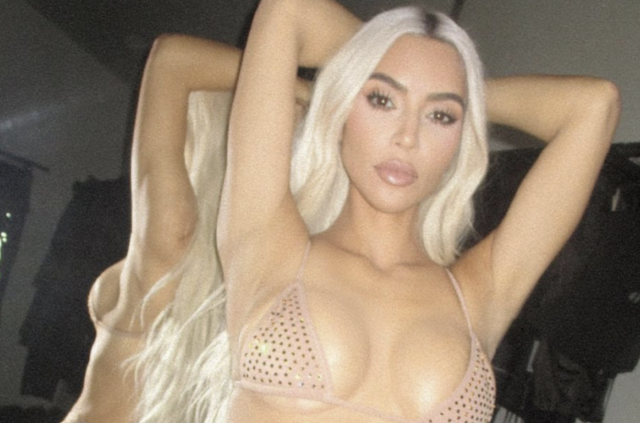 Earlier this week, we reported on the rumors that Pete Davidson is dating Emily Ratajkowski.

This news didn’t come as much of a surprise, of course.

In fact, if you’re an attractive female celebrity under the age of 65, dating Pete is as inevitable as climate change.

Scientists now predict that Davidson will have banged roughly 95 percent of all women in the greater Los Angeles area by the end of 2023.

We kid, of course, but the fact is, Pete gets around.

It was just a few months ago that Kim Kardashian broke up with Davidson, and already he’s rebounded with one of the most lusted-after women on the planet.

This is a level of player-dom that the world hasn’t witnessed since Warren Beatty was in his prime.

And it’s possible that Kim is starting to feel a pang of regret for letting Pete get away.

Kim posted the photo above earlier today, one of several racy pics that appear to have delighted her fans.

So obviously, her signature fashion line has some new items available in time for the holidays, and since Kim is one of the most famous women on the planet, it makes sense that the would use herself as a model.

“Happy holidays to me,” Khloe Kardashian commented, which is sort of a weird thing to write about your sister, but we’re sure Koko only intended to pay her sister a compliment.

Of course, some folks believe there’s more to Kim’s latest post than a simple desire to move some merch.

In fact, TMZ ran an article suggesting that Kim is engaging in a bit of revenge posting, subtly reminding Pete of what he’s missing out on.

That may seem like a petty move for a billionaire mother of four, especially since Kim is reportedly the one who dumped Pete.

But hey, Kim is still human, and if she wants to stir a little jealousy in Pete, at least she’s doing it in a way we can all enjoy.

Even though she was the one who pulled the plug on the relationship, it’s possible that Kim is upset by the news that Pete is dating Emily.

After all, Kim and Emily have been friends — or at least friendly — for several years, and the former might be feeling a little betrayed at the moment.

Kim just finalized her divorce earlier this year, and she’s already going through a breakup.

The woman has been though a lot.

And it makes sense that her mind would still be stuck on Pete.

After all, it’s not like she has to worry about Kanye hooking up with any A-listers!

That dude can’t get even get into bed with Skechers these days!

Listen To This: You’re Too Good To Be True!