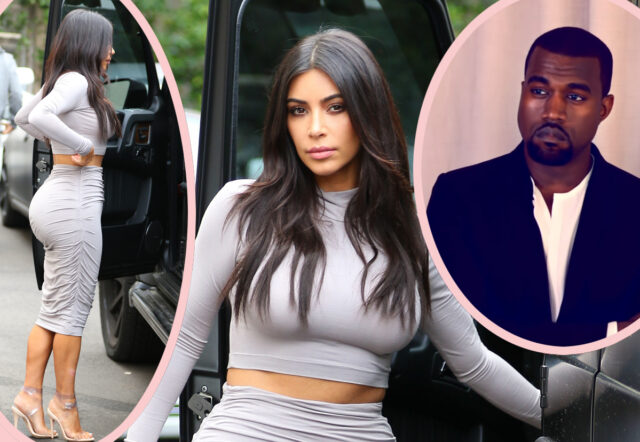 Kim Kardashian isn’t letting ANY man bring her down!

On February 23, the KUWTK star spent some much needed fun time in Beverly Hills after filing for divorce. She stepped out sans wedding ring and dressed up perfectly to fit the occasion. Sounds like the 40-year-old is beyond ready for a fresh start!

A source told US Weekly all about the ladies night:

“She was with Kourtney Kardashian, her old assistant Stephanie [Shepherd] and a few other girlfriends. She was wearing a seafoam green skintight dress with a diamond cross on. No camera crew or anything, but security was nearby.”

Good for her! You can check out pics of the outing — and that skintight dress over on DailyMail.com.

OK, obviously the ditching of the wedding ring is a huge statement by itself. But what we’re loving is the fact she’s going out in public in such a sexy way, but NOT because it means she’s ready to mingle. We’d strongly doubt that. No, it’s because it was one of the points of contention between her and Kanye West.

In case y’all need a refresher, back in 2019 the Stronger rapper gave Kim grief after she went out in a certain iconic dress, saying she was dressing “too sexy.” Suddenly he had decided he owned her body, and it wasn’t for other folks to see — some truly gross patriarchal nonsense! Like we said in the past coverage, Ye epically failed in that moment.

No worries though. Kim didn’t take that bulls**t then, and she’s stepping up again now — and apparently trying to move forward with her best life.

This includes spending some quality time with her sis. The source also said that:

“Kim was over at Kourtney’s on Wednesday, [February 17,] as the preparations for [the divorce filing] were being finalized.”

Aww! Well, this is one thing we love seeing: the Kardashian sisters being there for each other.

But Kim isn’t the only one processing the divorce. On the same day as Kardashian’s outing, sources discovered the rapper out and about as well, photographing his presence at Yeezy Christian Academy — also sans ring — with son Psalm. Which is kinda a major sign because last week he’d been spotted still wearing his gold band. Then again, Kim only filed for divorce on February 19, so maybe it took the official decision for Kanye to cut ties completely?

Related: Kim Kardashian & Kanye West Divorce Is A Good Thing And Here’s Why

Still, it sounds like he only has himself to blame. Sources told Us back on February 20 that he essentially crossed the line with some of his more radical comments. This is what they reported:

“The turning point in Kim and Kanye’s marriage was when he said that slavery was a choice. They went through a really rough patch in the aftermath of that. Kim was completely mortified by Kanye’s ridiculous and outrageous comments. It took a lot for them to move past it, but they were able to eventually. But when Kanye told the world that he and Kim had discussed aborting North [in July 2020], it was the breaking point in their marriage.”

Yeah, we get it, Kim. We’re just hoping that the divorce leaves everyone in a better place. And, obvs, both of them — especially Kim — seem to be moving forward.

But what do you think, Perezcious readers?!

Hot Docs 2021 Women Directors: Meet Louise Detlefsen – “It Is Not Over Yet”

Join the BET After-Party on DJ Cassidy's Pass the Mic