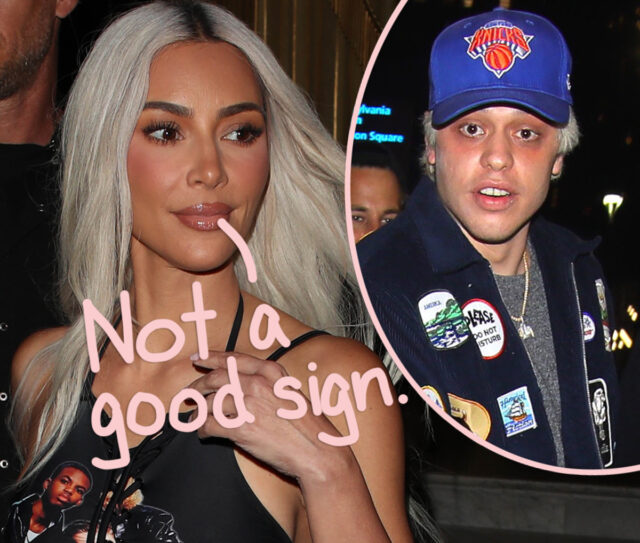 Kim Kardashian was not feeling one super impulsive move by Pete Davidson prior to their unexpected breakup last week. And honestly, hearing this take on it, we definitely understand her point of view.

The Meet Cute star is no stranger to tattoos. As Perezcious readers will recall, the 28-year-old comedian opted to commemorate his relationship with Kim with one piece of ink — and then another. And that second one was no bueno!!!

Related: Pete Is In Trauma Therapy ‘In Large Part’ Due To Kanye West’s Social Media Posts

The first ink Pete got regarding Kim was the infamous “my girl is a lawyer” message plastered to his chest. So far, so good, right? Definitely impulsive, and certainly a little forward considering the pair didn’t date that long before he had it done. But it’s cute, and serves as a nice nod to the SKIMS mogul’s legal aspirations! When you’re a guy like Pete, you basically tattoo your whole life on your body, so we get it.

The second tattoo didn’t go over nearly as well, though. As we’ve previously reported, the Saturday Night Live alum recently opted to ink ALL of Kim’s kids’ initials on his neck. Yes, really. We’re STILL surprised by it!!!

And, uhh, so was Kim. A source spoke to The Sun on Tuesday about the tattoo idea and revealed Kim’s thoughts about the unexpected ink:

“Everyone in the [Kardashian] inner circle knows that what started out as a fun thing for Kim had started becoming way more serious for Pete — and when he got those tats done, she was seriously freaked out.”

The source went on to add that it was the second tattoo — the neck tat of her four kids’ initials — that first really moved Kim to take action and step back a bit from the relationship:

“Her initial response was that the tattoo had to be a joke, but when he got the second one done, that’s about her kids, she was really taken aback.”

Honestly, it makes sense. We hate to see the relationship end, of course. Nobody wants to see any broken hearts or hurt emotions! But Kim had to do what she felt was best, and it sounds like the permanent ink placement moved her there. Ugh!!

Related: Kim And Kanye Are Co-Parenting In A Healthy Way — But Will It Continue?!

As for the breakup itself, the source also shared new details on that. It sounds like Kim feels bad about causing pain for Pete. But she still seems to be thrown by his warp-speed move ahead to thinking seriously about family. That’s something she’s just not ready to jump into (again) at this point in her life.

“I think Kim is feeling incredibly guilty over splitting from Pete. She knows how hard he’s taking it and that’s why he’s still a little confused, but for her, it was never going anywhere so she felt it was the best thing to do. He had started to hint at a future, talking about living together and bringing up marriage and kids. She was stunned!”

Definitely a set of conflicting priorities. It happens! Just sucks. Sadly, many of us have been there. Timing is everything! (And also, uhh, not tattooing your new girlfriend’s kids’ names on your neck. That too. Oof!)

As for Kim’s family, the insider revealed an interesting take on where the rest of the KarJenner clan is with this sitch. They definitely liked Pete, and have no ill will for the guy, but it sounds like he didn’t match up long-term. Kim apparently realized that, too, per the source:

“She’s saying that while they were very happy, she had to choose between him and her career and aspirations to be a lawyer because she only has 24 hours a day and the kids and work are obviously non-negotiables. She didn’t see him as husband material and that’s not what she is looking for right now.”

It was all going so well. And then… POOF! It’s all over just like that.