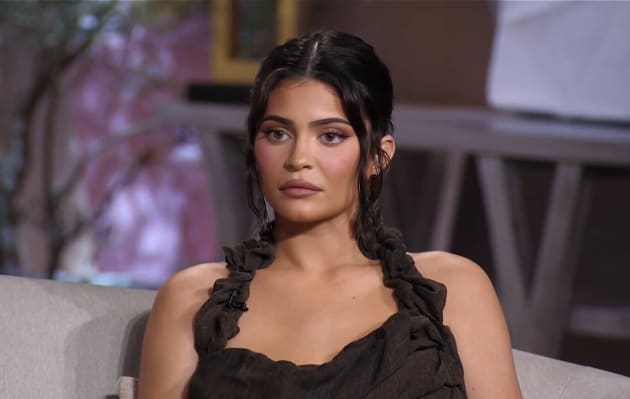 Back in February, Kylie Jenner welcomed her second child.


She still hasn’t shared any photos of the boy’s face, but Kylie has been surprisingly candid about every other aspect of her life as a mother of two.


Shortly after little Wolf entered the world, Kylie shared a labor video that showed fans a side of the makeup mogul that they’d never seen before.


And a few days after the birth, Kylie made a surprising revelation about her son’s name.


“FYI our son’s name isn’t Wolf anymore,” she and boyfriend Travis Scott wrote on their Instagram stories on March 21.


“We just really didn’t feel like it was him.”


So what is the name of the Baby Formerly Known as Wolf?


Well, nobody knows — including, it seems, Kylie.


The mother of two shared a photo of Wolf on her Instagram page on Sunday, but once again, fans didn’t get to see the little tyke’s face.


Instead, they were treated to a shot of his shoes as he was being held by someone who may or may not be his father at Kris Jenner’s Easter celebration.


Not surprisingly, the photo prompted a new discussion of the controversy surrounding the baby’s name.


But still, Kylie and Travis are both keeping mum on that issue.


Fans might feel frustrated, but it seems the parents have a very good reason for keeping quiet about this name business:


They’re not yet sure what the name is themselves!


“Before I officially change it, I want to make sure. … Wolf was never on our list. It just was something Khloe [Kardashian] suggested,” she continued.


“I liked the name. There’s nothing against Wolf, it just wasn’t him.”


We appreciate the manner in which Kylie subtly tried to pass the blame onto Khloe, and we respect her right to keep the name to herself.


After all, she could have never even revealed the name change and simply allowed fans to go on assuming that the boy was named Wolf.


Instead, she admitted that she had had a change of heart, which couldn’t have been an easy thing to do.


Kylie likely knew that she would be criticized and accused of flightiness, but she put her son first and decided to wait for a name that truly suits him.


These days, some folks are criticizing Kylie for biding her time and expecting the boy’s personality to point the direction to his name, despite the fact that newborns spend the vast majority of their time eating, sleeping, and pooping.


But hey, this is the method that works for Kylie and her family, so that’s what they’re going with


The Kardashians Hulu series made its long-awaited debut last week, so Kylie and her kin are reality stars once again.


Kylie’s son will likely make his debut on the show on some point, and perhaps she’ll wait until then to reveal the boy’s name.


In the meantime, we’re sure that she and Travis are making the most of getting to know Stormi’s little brother!

Tinder Swindler Simon Leviev Says He Is ‘Not A Fraud’ In First Interview After...

Trailer Watch: Taylor Tomlinson Opens Up About Her Mental Health in “Look At You”