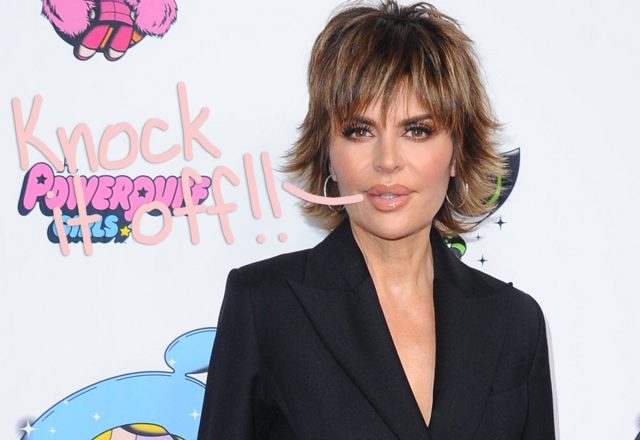 Lisa Rinna is walking back her affiliation with the Real Housewives of Beverly Hills — on social media, at least.

This week, eagle-eyed fans noticed the longtime reality TV star had removed some posts from her Instagram page. Curiously, all those posts were Bravo-related fare, promos for RHOBH eps and happenings, etc., etc. So immediately fans pondered whether Lisa was walking away from her mainstay role on the hit show! Well, thankfully, that’s not happening. But there is some crazy s**t going down all the same!!

Perezcious readers will recall our reporting late last week on Lisa’s RHOBH co-star Garcelle Beauvais and her teenage son Jax.  At the time, Jax was receiving a lot of unwanted attention from overzealous fans of the show who were calling him out for the on-air actions of his mom amid a TV feud with Erika Jayne and others. Some fans took it WAY too far and showered Jax with completely inappropriate, hateful, and disgusting messages.

Garcelle spoke about it with grace at the time, and plenty of cast members backed her up. Bravo even released a statement about the aggressive social media cyber bullying and strongly urged their fans to knock it off. But that didn’t change things quickly enough. And now, Lisa is taking her own action to tamp down on the s**t storm!

According to Social Blade, Rinna recently had almost 400 posts on her IG account. But a quick check of her content on Monday puts the number at just 191 uploads. She cleaned out her Twitter account, as well, wiping lots of tweets from her message history. She even very specifically deleted her re-share of Bravo’s message asking fans to quit bullying Jax!

When fans started asking why she did it, Harry Hamlin‘s wife didn’t hesitate to explain her motives. Writing in an IG Stories post published on Monday, and then apparently later deleted, Lisa shared:

“I was asked what happened to the bravo statement on my instagram. This is my reply”

She went on to add that her own children — Amelia and Delilah Hamlin — were apparently being threatened and harassed by fans online along with Jax:

“I archived it that’s all. I’ve been keeping my social page very edited if you will notice, I’m keeping it very positive non negative and fashion and fun I don’t want anything negative on my grid and since my own children are being threatened as we speak I felt it best to archive it.”

“The statement did nothing so why keep it up? Our children are getting dealt threats. All of our children. It’s gone beyond and I need to keep my family safe now. I will no longer be saying or posting anything about the show.”

Like we said, that IG Stories explainer was first uploaded early on Monday. But as of Monday evening, it is no longer on Rinna’s Stories tab.

Nevertheless, you can see a screenshot of the explanation (below):

Well then! That definitely clears it up.

She clarified her picture-removal work in a second post on the site, too, and explained she didn’t take ‘RHOBH’ out of her bio because it wasn’t there in the first place:

“I never had RHOBH anywhere on my Instagram in my profile and I have recently edited my Instagram page for fashion fun and family. I took away 8000 photos I did that about 3 weeks ago if you go and look there’s still housewife stuff on there from the reunion from the wine scene in Provence… dancing in Provence.”

So there you have it, we guess.

The situation involving Jax was a really unfortunate one for Bravo and its legion of fans. And most especially for Jax. Now, it appears those concerns have spilled over to other cast members’ younger family members, too. Ugh!!

What do U think, Perezcious readers??